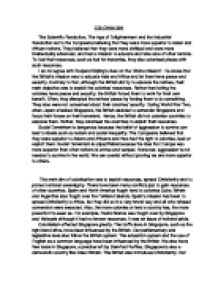 Colonialism and the experience of Singapore.

COLONIALISM The Scientific Revolution, The Age of Enlightenment and the Industrial Revolution led to the Europeans believing that they were more superior to Asian and African nations. They believed that they were more civilised and were more intellectually advanced, and had a mission to educate and take care of other nations. To fuel their resources, such as fuel for industries, they also colonised places with such resources. I do not agree with Rudyard Kipling's view on the "divine mission". He states that the British's mission was to educate Asia and Africa and let them have peace and security. Contrary to that, although the British did try to educate the natives, their main objective was to exploit the colonies' resources. ...read more.

Hence, the British did not colonise countries to educate them. Rather, they colonised the countries to exploit their resources. Social Darwinism is dangerous because the belief of aggression to survive can lead to ideals such as racism and social inequality. The Europeans believed that they were superior to Asians and Africans and thus had the right to colonise, lead or exploit them. Social Darwinism is unjustifiable because the idea that Europe was more superior than other nations is untrue and warped. Moreover, aggression is not needed to survive in the world. We can coexist without proving we are more superior to others. ...read more.