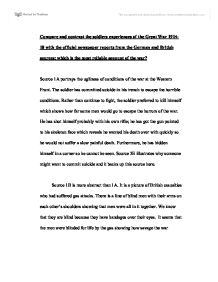 Compare and contrast the soldiers experiences of the Great War 1914-18 with the official newspaper reports from the German and British sources; which is the most reliable account of the war? Source 1A portrays the ugliness of conditions of the war at the Western Front. The soldier has committed suicide in his trench to escape the horrible conditions. Rather than continue to fight, the soldier preferred to kill himself which shows how far some men would go to escape the horrors of the war. He has shot himself probably with his own rifle; he has got the gun pointed to his skeleton face which reveals he wanted his death over with quickly so he would not suffer a slow painful death. Furthermore, he has hidden himself in a corner so he cannot be seen. Source 3E illustrates why someone might want to commit suicide and it backs up this source here. Source 1B is more abstract than 1A. It is a picture of British casualties who had suffered gas attacks. There is a line of blind men with their arms on each other's shoulders showing that men were all in it together. We know that they are blind because they have bandages over their eyes. It seems that the men were blinded for life by the gas showing how savage the war became. This source is linked to source 3A "Dulce Et Decorum Est" as they both represent revulsion. Source 1C is a picture of repelling German counter attack. The picture is very graphic and portrays a typical depressing battlefield. ...read more.

This reveals the annihilating environment that throttles the surroundings. The rain distracting the troops is more pain and torture for them. Paul Nash describes it as "Unspeakable, godless, hopeless" This is because the soldiers have done so much that they feel speechless. This description is backed up by source 3E which also creates a choking atmosphere. Source G shows a gruesome, ghastly, sickening side of trench warfare. The violence that occurred was not forgetful but scarred the troops for life. They are described as ruthless animals attacking each other. "The fighters snarled and worried and scuffled and clutched and tore at each other more like savage brutes than men". The fear of death was enormous as most soldiers knew that there was a low chance for survival. The war was bloody and vicious and millions of people died each day facing the same situations which can also be supported in source 3J. Source H shows what equipment soldiers had to carry in warfare. He would be carrying a total of 30 kilograms of equipment This included a rifle, two mills grenades, 220 rounds of ammunition, a steel helmet, wire cutters, field dressing, entrenching tool, greatcoat, two sandbags, rolled ground sheet, water bottle, haversack, mess tin, towel, shaving kit, extra socks, message book and preserved food rations. The weight of the equipment made it difficult to move very fast across No Man's Land. The bayonet in his right hand would be a dangerous weapon which could stab someone in the back or though the heart causing blood and anguished death. ...read more.

This source can be backed up by source 5 as it gives a similar example. Source 7 was written on June 5th 1915 by Lord Derby. This last source shows a contrast to what the conditions were like. In all the newspapers reporters explained how successful they have done and Lord Derby clarifies by saying, "the Government are doing the best they can for their country" He appreciates this but also knows something is missing as they have not mentioned what is going on. He speaks out by saying, "I think we ought to be given little more news of what our troops are doing in field". The reporters have to be careful on what they write, but they are now being questioned by the people at home. Finding out about the horrible conditions would cause a lot of anger which is one big reason why it was not mentioned. This source can be backed up by source I as it conveys the conditions troops faced. Overall the soldier's experiences and the official accounts are very different from each other. The soldier's experiences illustrate the suffering of soldiers who faced terror throughout the Great War, were as the official accounts tell a different side of the Great War reporting how well the war was going. The troops experienced such awful conditions that they would describe it as "unspeakable, godless, hopeless" On the other hand the official accounts explained that "further important successes have been gained by troops" This gives evidence on how they contrast. However I think the most reliable sources are the soldier's diary accounts as they are personal, telling the reader their personal experiences and how they felt. ...read more.