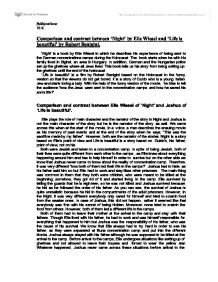 Comparison and contrast between Night by Elie Wiesel and Life is beautiful by Robert Benigini.

Comparison and contrast between 'Night' by Elie Wiesel and 'Life is beautiful' by Robert Benigini. 'Night' is a book by Elie Wiesel in which he describes his experience of being sent to the German concentrations camps during the Holocaust. The book starts when he with his family lived in Sighet, an area in Hungary. In addition, German and the Hungarian police set up the ghettoes where all Jews lived. This book tells us his story from being setting up the ghettoes until the end of the holocaust. 'Life is beautiful' is a film by Robert Benigini based on the Holocaust in the funny version so that the viewers do not get bored. It is a story of Guido who is a young Italian Jew and starts loving a lady. With the help of the funny version of the movie, he tries to tell the audience 'how the Jews were sent to the concentration camps and how he saved his son's life?' Comparison and contrast between Elie Wiesel of 'Night' and Joshua of 'Life is beautiful'. Elie plays the role of main character and the narrator of the story in Night and Joshua is not the main character of the story but he is the narrator of the story as well. We came across this when at the start of the movie, in a voice; a man describes the ensuing movie as his memory of past events and at the end of the story when he says, "This was the sacrifice made by my father". ...read more.

This shows that in reality everybody cared for themselves and killed others in order to get their food. We know that Guido was married to an Italian but not Jewish while Schlomo was married to Jewish lady. Although being married to a non-Jewish lady, Dora, Guido was sent to the concentration camp. This is a symbol showing that even the people who were married to the non-Jewish lady and their children were not given any kind of benefit and they were sent to the concentration camp as well. Schlomo died sometime before the liberation as he was ill, so SS officers took him one night and he was probably killed but Guido died when he was trying to save his wife and son. We know that the stories of Schlomo and Guido was happened or set during the Holocaust, so Schlomo's story fits more to the history as compare to the Guido's story. This is because Guido was young and was able to work but he died and his wife and son survived who were meant to be killed at the start. So it seems unrealistic that they survived and he died. Comparison and contrast between the camps shown in NIGHT and LIFE IS BEAUTIFUL As we compare the camps shown in Night and Life is Beautiful, we see that in Life is Beautiful, guards mostly never speak or mistreat with the prisoner. The prisoners were always shown working on their own and guards just stay near them and watched them working. ...read more.

Then he saw his mother and run to her and the film ends with the voice saying that "this was sacrifice made my father to save us." The ends of the film and the books are quite different from each other as in book, Jewish resistance has already took control over the camp before arrival of the American troops, but in the film everybody stayed hidden until American troops arrived. In the book, most of the prisoners stayed at the camp even after liberation; probably because they didn't have any other place where they could live, but in the film everybody left the camp and went somewhere. This was probably used as symbol for freedom. In the book, it is written that the people didn't think of revenge but of food, but in the movie nobody was shown hungry or trying to fetch some food, which can't be true that the people who are nearly starving from last few months, did not even try to get some food. So in my opinion, the conclusion of the book fitted to the situation of the holocaust but the conclusion of the film did not really fits to that situation but it seems that it focuses more on the story that 'how to make the meeting of Joshua and Dora more interesting?' I think that the film is presumably intended as a tribute to the powers of imagination, innocence, and love in the most harrowing of circumstances. ?? ?? ?? ?? Sukhjant kaur 10 R ...read more.