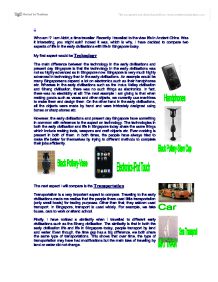 They could make inscriptions and inscribe or carve on hard objects. This showed that they planned whatever they were going to do before attempting to do this. This is a good skill-planning before embarking on doing. I think I would like to adopt this ability/skill to prevent rash decisions which may result in several mistakes. Planning goes a long way. A quote I heard several times is "If you fail to plan, you plan to fail." Therefore, the people of the early civilisation were successful as they had steadfast determination and well planning. An example of well planning would be the Indus Valley civilisation. In Mohenjo-daro, a main city of the Indus Valley Civilisation, it was a very well planned city with many public buildings and the world's first complex underground drainage system was there. The people of the early civilisation put in their best even if it seemed unlikely that they would succeed. In conclusion, I admire the early civilisation people for being determined and persevering in doing whatever they do, overcoming obstacles, finding solutions to their problems such as solving the irrigation flood problem etc. ...read more.