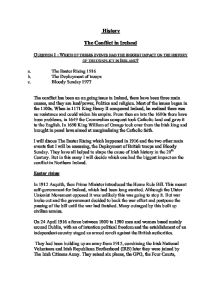 History The Conflict in Ireland QUESTION 1 : WHICH OF THESES EVENTS HAD THE BIGGEST IMPACT ON THE HISTORY OF THE CONFLICT IN IRELAND? a. The Easter Rising 1916 b. The Deployment of troops c. Bloody Sunday 1977 The conflict has been an on going issue in Ireland, there have been three main causes, and they are land/power, Politics and religion. Most of the issues began in the 1100s. When in 1171 King Henry II conquered Ireland, he realised there was no resistance and could widen his empire. From then on into the 1600s there have been problems, in 1649 the Cromwelian conquest took Catholic land and gave it to the English. In 1690 King William of Orange took over from the Irish king and brought in penal laws aimed at marginalising the Catholic faith. I will discus The Easter Rising which happened in 1916 and the two other main events that I will be assessing, the Deployment of British troops and Bloody Sunday. They have all helped to shape the cause of Irish history in the 20th Century. But in this essay I will decide which one had the biggest impact on the conflict in Northern Ireland. Easter rising In 1912 Asquith, then Prime Minister introduced the Home Rule Bill. ...read more.

This had the effect of building tension between these two groups of people. During the 1920's and 30's segregation discrimination and distrust were very prevalent throughout the whole of Northern Ireland and almost everyone was touched by the conflict. The Welfare State had tried to tackle the problems of housing and health in the 1940's also education reforms improved for both nationalists and unionists. The IRA stopped its terrorist campaign; this gave them the name 'I Ran Away'. They lost support and upset many the Catholics felt abandoned. But then in 1968 civil rights movement campaigns began against discrimination, working class people resented these as they were poor and faced hardship, in January 1969 militants within the civil rights movement held more protests. In 1969 the British police were called to settle a riot, which had broken out in the predominantly catholic area of the Bogside. Days earlier an illegal march organised by the apprentice boys had cut through this area and led to an outbreak of violence that could not be contained by the RUC. They were forced to call on the British for assistance and 2 days after the rioting had begun the British deployed troops into Northern Ireland in an attempt to stop the rioting. They were successful and in the afternoon of the 14th August the Battle of the Bogside ended. ...read more.

The paras account on Bloody Sunday was taken as the official report and it said they were acting in self defence. This was seen as a cover up by many people. IRA violence had now been targeted on British soil, there had been several attacks in England. The IRA violence also sparked off retaliation for unionists. IN September 1971 The Ulster Defence Association had been formed. Then during the 70's and 80's the UDA and others responded to republican violence by killing IRA Sinn Fein activists and innocent Catholics. This has now brought the violence to Britain and this will worry British people, and but more pressure on the government. Westminster is also directly affected. I believe out of each of these events that Bloody Sunday had the largest impact on the conflict in Ireland. This is because it lead to many peace initiatives which have therefore helped move the peace process forward. I don't believe the others were as important as they didn't bring as much emphasis on bring peace and helping Northern Ireland forward. Pearse and Connolly's actions during the Easter rising had lead to many more people get involved in the situation. I do think that the deployment of British troops had the biggest negative effect as during the falls road incident many people had felt mistreated. Most of them innocent had been accused of being in possession of IRA weapons. By this it will have changed views of many people. ...read more.