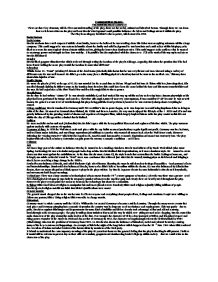 Contextualising the text- The resistible rise of Arturo Ui There are three key elements, which effect our understanding of the play, these are the social, cultural and historical factors. Through these we can learn how each factor relates to the play and how Brecht's background could possible influence the ideas and feelings stressed within the play. The Play is an allegory for Hitler's rise to power, which started in 1925. Social factors Social status: Brecht was born into a well-respected middle-class family, however he believed he was working class. His father was an aspiring salesman within a large company. This could suggest he was extremely humble about the family and solid background he was born into and could reflect within his plays, as he liked to reverse the stereotypical views of status within society, giving the lower class dominant roles. This could suggest to the audience that he wanted to encourage power and strength to those less wealthy. It is possible Brecht emphasised with the character of Ui as he worked his way up in society as Brecht did himself. Gender: Brecht liked gangster films therefore this is reflected through setting the location of the play in Chicago. ...read more.

Politics: He was a socialist and an anti nazi (Nationalist) Brecht didn't agree with the heavy political ideas and nazi regimes of his time which. The play warns us against anybody with extreme viewpoints. Economy of time: In 1929 the Wall street crash took place with the capitalist means of production; to gain significant profit. Germany was in a bad state, suffered from major Inflation, and owed huge reparations (60 million) to America who wanted all money back after the Wall Street crash. However following the "roaring twenty's" which Brecht experienced, America sunk into massive economic depression and moral was extremely low. The play begins with talk of lack of money. Extremist can gain power in extreme economic conditions- as Ui does. Cultural Art: Art was a huge part of the culture to influence Brecht, he wanted to be a working class hero. Brecht was influenced by Frank Wedenkind (who wrote Spring Awakening) He was a hedonist and people looked up to him. Brecht idealised this Expressionism, as it was a dominant style. He wanted to create characters that went against the establishment. At the time Brecht wrote Arturo Ui, the style is such that externalises the inside feelings of someone, and is largely un-subtle as Brecht's work is. ...read more.

Brecht recognises this hunger and desperateness for some kind of stability and Hitler cleverly took advantage of that and offered a strong breakthrough to the German people. The play is writing about turbulent times and the way in which everything seemed to be changing. Brecht centred the main characters of the play around the main leaders of the time. For example the character of Ui is a clear portrayal of Hitler, and his gained respect and rising power. Founder of the Nazi's in 1920 and chancellor of Germany in 1933.The character of Dogsborough reflects the field Marshall in WW1 (Hindenburg) who was the president of Germany from 1925-33. Brecht also shows the influence of historical, social and cultural factors by centring many of the key events on real happenings. An example of this is the night of the long knives which happened on the 30th June 1934 when Hitler ordered the execution of Rohm and other leaders of the brown shirts by members of the Nazi party. It is hard to understand the contemporary meaning of the play 62 years later however the general feeling that the play is shocking is still present. I believe it would still be relevant to present day as there still are terrorists, gangsters and domineering leader's high up within society that we could relate to the characters of the play. ...read more.