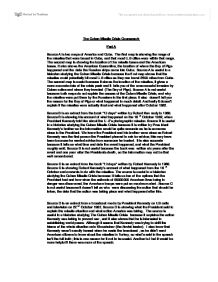 The Cuban Missile Crisis Coursework Part A Source A is two maps of America and Cuba. The first map is showing the range of the missiles that were based in Cuba, and that most U.S cities were within that range. The second map is showing the location of the missile bases and the American bases. It also shows the American Quarantine, the location of where the Bay of Pigs happened and the date the Russian ships came into Cuba. Source A is useful to a historian studying the Cuban Missile Crisis because the first map shows that the missiles could potentially hit most U.S cities as they can travel 2500 miles from Cuba. The second map is useful because it shows the location of the missiles, it gives a more accurate date of the crisis peak and it tells you of the unsuccessful invasion by Cuban exiles and where they invaded (The Bay of Pigs). Source A is not useful because both maps do not explain the causes of the Cuban Missile Crisis, and why the missiles were put there by the Russians in the first place. It also doesn't tell you the reason for the Bay of Pigs or what happened in much detail. And lastly it doesn't explain if the missiles were actually fired and what happened after October 1962. Source B is an extract from the book "13 days" written by Robert Kennedy in 1968. ...read more.

Another reason it may not be useful is it is from the "Memoirs" of Gromyko, so it may not be completely accurate. Source F is an extract from the Memoirs of Khrushchev, published in 1975. The source is showing Khrushchev's interpretation of what happened in the missile crisis. Source F is useful to a historian studying The Cuban Missile Crisis because it shows Khrushchev's account of what happened, and a historian would be able to see the benefits of backing down for Khrushchev; he came out of the situation as a hero and a peace maker to the soviet circles. The fact that he had been made to back down was quickly forgotten and people were told that he 'made the first move to compromise' instead. Source G is an extract from a British History book, "The Age of Containment" by D.Rees in 1967. The source is showing D.Rees opinion of the ending of the missile crisis. Source G is useful to a historian studying The Cuban Missile Crisis because it shows us how the crisis was resolved although the source is also not useful because it is seems bias as the British were Americas allies and certainly on the Americans side; they blamed the USSR for pretty much everything. Source H is an extract from "13 days" by Robert Kennedy. The source is showing Robert Kennedy's interpretation of The Presidents feeling towards the events that had happened. ...read more.

Source H is written by Robert Kennedy; President Kennedy's brother so you can tell straight away it is going to be on the USA side. The interpretation just explains how the President didn't take victory away from these events. Source G and Source H are claiming that it was the USA who was victorious and Source F is saying how it was the USSR who won overall. The most accurate interpretation of the outcome of the Cuban Missile Crisis in my point of view is Source G. This is because it is not written by either side of the crisis; not USA or USSR. Instead it is written by A British historian. The reason I don't think that Source F is the most accurate is because Khrushchev is just trying to claim a personal victory, when most of the information he is saying is false. There is also no mention of the second letter sent to Kennedy as he ignored this letter and did not meet Khrushchev's demands. The reason I don't think that Source H is the most accurate is because I am sure that President Kennedy did take some credit for the outcome and the source is written by his brother, so it is obviously going to be one sided. Although I think that Source G is the most accurate, all of the sources are needed for a historian to find out all the opinions and facts to do with the Cuban Missile Crisis and tell us what both countries wanted people to believe. ...read more.