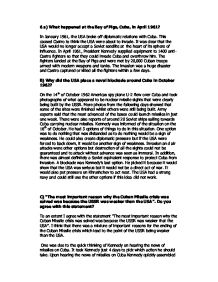 cuban missile crisis and the bay of pigs

6 a) What happened at the Bay of Pigs, Cuba, in April 1961? In January 1961, the USA broke off diplomatic relations with Cuba. This caused Castro to think the USA were about to invade. It was clear that the USA would no longer accept a Soviet satellite at the heart of its sphere of influence. In April 1961, President Kennedy supplied equipment to 1400 anti-Castro fighters so that they could invade Cuba and overthrow him. The fighters landed at the Bay of Pigs and were met by 20,000 Cuban troops armed with modern weapons and tanks. The invasion was a huge disaster and Castro captured or killed all the fighters within a few days. B) Why did the USA place a naval blockade around Cuba in October 1962? On the 14th of October 1962 Americas spy plane U-2 flew over Cuba and took photographs of what appeared to be nuclear missile sights that were clearly being built by the USSR. ...read more.

To an extent I agree with the statement "The most important reason why the Cuban Missile crisis was solved was because the USSR was weaker that the USA". I think that there was a mixture of important reasons for the ending of the Cuban Missile crisis which lead to the point of the USSR being weaker than the USA. One was due to the quick thinking of Kennedy on hearing the news of missiles on Cuba. It took Kennedy just 4 days to pick which action he should take. Upon hearing the news of missiles on Cuba Kennedy quickly assembled a special team of advisors who then came up with a number of choices of what to do. This shows they were stronger than the USSR as he This links to a second reason why the crisis was solved. It was not just Kennedy's quick thinking but also the way in which he prevented the crisis from continuing. ...read more.

I also think that it wasn't the fact the USSR were weaker than the USA it was just that the USA put off the problem from getting worse rather than solving it. Kennedy's idea of a blockade, whilst being a very good idea, did not actually address the problem it just stopped it from worsening which links to the idea that it was not the weakness of the USSR that solved the Cuban Missile crisis but the fact that the USA was skilled at preventing the problem from getting worse. To a certain extent I disagree with the title as it was not the idea that the USSR were weaker than the USA it was the idea that the USA were just good at getting themselves out of tricky situations. However, to a greater extent I agree with the statement as it was only due to Khrushchev backing down that the crisis ended. Shoshi Weisman 11ER Mr Felsenstien ...read more.