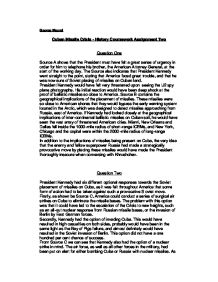 George Maund Cuban Missile Crisis - History Coursework Assignment Two Question One Source A shows that the President must have felt a great sense of urgency in order for him to telephone his brother, the American Attorney General, at the start of the working day. The Source also indicates that President Kennedy went straight to the point, stating that America faced great trouble, and that he was now sure of Soviet placing of missiles on Cuban land. President Kennedy would have felt very threatened upon seeing the U2 spy plane photographs. His initial reaction would have been deep shock at the proof of ballistic missiles so close to America. Source B contains the geographical implications of the placement of missiles. These missiles were so close to American shores that they would bypass the early warning system located in the Arctic, which was designed to detect missiles approaching from Russia, east of America. If Kennedy had looked closely at the geographical implications of inter-continental ballistic missiles on Cuban soil, he would have seen the vast array of threatened American cities. Miami, New Orleans and Dallas fell inside the 1000-mile radius of short-range ICBMs, and New York, Chicago and the capital were within the 2000-mile radius of long-range ICBMs. In addition to the implications of missiles being present on Cuba, the very idea that the enemy and fellow superpower Russia had made a strategically provocative move by placing these missiles would have made the President thoroughly insecure when conversing with Khrushchev. Question Two President Kennedy had six different optional responses towards the Soviet placement of missiles on Cuba, as it was felt throughout America that some form of action had to be taken against such a provocative Soviet move. Firstly, as shown be Source C, America could conduct a series of surgical air strikes on Cuba to eliminate the missile bases. The problem with this option was that it could have led to the escalation of the Crisis to new heights, such as an all-out nuclear response from Russian missile bases, or the invasion of Berlin by East German forces. ...read more.

The fact that Source F is a diplomatic letter from one side to the other means that behind the scenes intentions of the USSR are not shown. This use of tact was wise, as it would bring a swifter solution to the problem. Using other public knowledge, it was apparent that the deal extended into Khrushchev asking for the USA to remove Jupiter missiles from Turkey. Although this isn't a reason for involvement in the conflict, the USSR's secret intentions were revealed here. It is more likely that Khrushchev was taking advantage of an already decent situation. By mentioning this in his diplomatic letter, Khrushchev would have seemed threatened by the Turkish missiles, and therefore weak in the face of the Americans. In conclusion, the sources are fairly helpful in understanding motives, although throughout it is important to understand that Khrushchev did not at any point want to appear weak. Question Four The Cuban Missile Crisis was settled so quickly due to four different yet corresponding reasons. To begin with, the nature of the crisis was such that both sides were on the edge of their seats awaiting an opportunity to end the conflict, yet attain their individual goals or aims from the crisis at the same time. In other words, the danger of a nuclear war was so frightening to the leaders that neither wanted to have to make a ground breaking move towards nuclear war. However, the USA was intent on getting rid of the missiles on Cuba, and the USSR was intent on America not invading the island or carrying on their naval blockade. Yet at every opportunity in the past both of the sides were mildly belligerent, often using the threat of their nuclear capability as a means of bullying the other into backing out. This is why at the stage of the crisis featured in Sources H and I, both sides were much more agreeable and were leaning towards solving the problem rather than resorting to a nuclear war. ...read more.

In Source J, the Soviet leader tells how the American President "gave in", and that this was a great victory of communism and Soviet foreign policy. In the sense that neither side fired a shot at the other, it was a success of Soviet constraint. Khrushchev's book would have been news to some of the Soviet people, as current affairs weren't broadcast to the public in the USSR. It is for that reason - the fact that never before have the Soviet people been able to judge the outcome of the Cuban Missile Crisis - that Khrushchev makes his book so self-glorifying. If we look at the reasons why the USA agreed to the terms of Khrushchev's diplomatic letter it is possible to see why it is that Kennedy is the more victorious of the two leaders. After the disaster of the Bay of Pigs invasion, President Kennedy would have been strongly against the idea of a second invasion, even more so than when he had felt unhappy with the idea of the Bay of Pigs taking place. In that sense, Kennedy had lost nothing at all - as Khrushchev had only asked of him to remove the blockade from around Cuba. It was also apparent that Kennedy wanted to remove missiles from Turkey before the Cuban crisis had begun, so again in that sense he had not lost anything or had anything demanded of him which he did not wish to go along with. Khrushchev on the other hand had wanted to bypass the American early warning system in the Arctic by placing missiles on Cuban shores. Thus, he had lost the ability to destroy any American city within a 2000 miles radius of Cuba. In conclusion, the views vary so widely because the historian merely wishes to give a fair account, whereas Khrushchev wants to save face and appear to be less weak than he actually was during the crisis. ...read more.