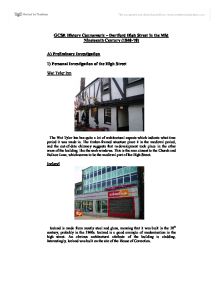 GCSE History Coursework - Dartford High Street in the Mid Nineteenth Century (1840-70) A) Preliminary Investigation 1) Personal Investigation of the High Street Wat Tyler Inn The Wat Tyler Inn has quite a lot of architectural aspects which indicate what time period it was made in. The timber-framed structure place it in the medieval period, and the out-of-date chimney suggests that re-development took place in the other areas of the building, like the sash windows. This is the area closest to the Church and Bullace Lane, which seems to be the medieval part of the High Street. Iceland Iceland is made from mostly steel and glass, meaning that it was built in the 20th century, probably in the 1960s. Iceland is a good example of modernisation in the high street. An obvious architectural attribute of the building is cladding. Interestingly, Iceland was built on the site of the House of Correction. Boots Boots is a more recent building, on evidence of the materials it was made from. Like Iceland, it was made from glass and steel, which implies that it has been re-developed significantly. It still has sash windows though, meaning not all of it was changed. It was re-developed in the 1980s. The building occupies the site of the George Coaching Inn. Curtess Curtess has some distinctive architectural aspects, but has been re-developed significantly. ...read more.

Source A, a history of Dartford written by John Dunkin in 1844, talks about what the High Street was like in his own time. It is quite descriptive, and gives the opinion of someone who actually lived there. It's quite reliable because Dunkin was a historian, and gives an indication of the function of buildings. However, it is clearly biased, and his motives are questionable, as he would be making money by printing his history of Dartford. There is a limited detail on appearance, and it may only be describing certain areas of the High Street. Also, this was written in 1844, 4 years before the Public Health Act was enforced, and also before the railways, so the conditions would seem better than they actually were. In conclusion, it's relatively useful because it is a primary source, but it may not be completely accurate, and may only be describing a small area of the High Street. Report to the General Board of Health (Source B) Source B, a report written by William Ranger in 1849 to expose the state of Dartford, was written after the Public Health Act (1848) was imposed. The intention was to collect evidence to force through changes, so the report contained a lot of negative views. It is reliable because it is an official enquiry, and is useful because it suggests something to do with appearance, and it talks about living conditions of the lower class. ...read more.