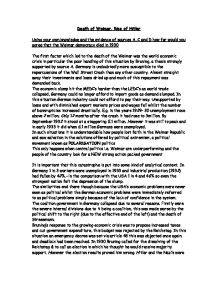 Death of Weimar, Rise of Hitler - Using your own knowledge and the evidence of sources A, C and D how far would you agree that the Weimar democracy died in 1930.

Death of Weimar, Rise of Hitler Using your own knowledge and the evidence of sources A, C and D how far would you agree that the Weimar democracy died in 1930 The first factor which led to the death of the Weimar was the world economic crisis in particular the poor handling of this situation by Bruning, a thesis strongly supported by source A. Germany is undoubtedly more susceptible to the repercussions of the Wall Street Crash than any other country. Almost straight away their investments and loans dried up and much of this repayment was demanded back. The economic slump hit the MEDC's harder than the LEDC's as world trade collapsed, Germany could no longer afford to import goods as demand slumped. In this situation German industry could not afford to pay their way. Unsupported by loans and with diminished export markets prices and wages fell whilst the number of bankruptcies increased drastically. E.g. in the years 1929- 30 unemployment rose above 2 million. Only 12 months after the crash it had rose to 3million. By September 1932 it stood at a staggering 5.1 million. However it was still to peak and in early 1933 it did when 6.1 million Germans were unemployed. In such situations it is understandable how people lost faith in the Weimar Republic and saw salvation in the solutions offered by political extremism, a political movement known as POLARISATION politics This only happens when central politics i.e. Weimar are underperforming and the people of the country look for a NEW strong action packed government It is important that this catastrophe is put into some kind of analytical context. In Germany 1 in 3 workers were unemployed in 1933 and industrial production (1932) had fallen by 42%.- in the comparison with the USA 1 in 4 and 46% so even the strongest nation felt the depression of the slump. ...read more.

With reduced public spending and increased taxes there were no consumers therefore more factories had to be closed which inevitably led to UNEMPLOYMENT. "In the years 1929- 1930 unemployment rose above 2 million. Only 12 months after the crash it had rose to 3million. By September 1932 it stood at a staggering 5.1 million. However it was still to peak and in early 1933 it did when 6.1 million Germans were unemployed."1 The problem with this unemployment is that they were all so young; the significance of this is that the youth are a lot easier to be radicalised, and recruited to the SA, once in the SA they are told that they are the saviours of Germany. "Idle Hands make Evil Minds"2 This vicious circle affected many people from all over the social spectrum and Germany ended up with a pool of Nazi extremists. In this situation an emergency decree was set via article 48 this was objected and deadlock had been reached. He called for the dissolving of the Reichstag & to call an election in which he thought he would receive majority support. However the election results proved him wrong. Hitler and the Nazi's were the real beneficiaries, and suddenly became the second largest party in the Reichstag with 107 seats. It was with this poor handling of the crisis and abuse of Article 48 that it can be argued that Bruning was most responsible for Hitler's rise to power! Source A agrees with this thesis it quotes that "the steep decline of the German economy after 1929 was an essential pre condition for the success of the Nazi's" Source E talks about how any small chance of survival before the policies was totally gone by the end of them. This can be put down to the "attitudes and actions of the German electorate and their political leaders." A historian suggests that Nazism was a logical continuation of German history. ...read more.

This process only happens when central politics i.e. Weimar are underperforming and the people of the country look for a NEW strong action packed, extreme government. I believe the coalition government collapsed due to several reasons. Most importantly were the severe internal divisions due to it being a coalition. Its inability to agree on necessary decisions gave no platform to the rest of society; this was made worse by the political shift to the right (due to the effective end of the left) and the death of Stresemann. After the burning down of the Reichstag the Nazis were allowed to exploit real fears of communism and uprisings. They were also allowed to put them down. With the help of the police (who were aided by new volunteers- the SA) they arrested many politicians and successfully persuaded Hindenburg to issue a decree "FOR THE PROTECTION OF PEOPLE AND STATE" 4 which ended civil liberties which were previously guaranteed in the Weimar Republic. The demise of the left and the influence of polarised politics left many people with only one option... the Nazis! Overall I believe that Hitler's rise to power was due to several combined factors. The Reichstag were already under pressure due to the war guilt clause and the treaty of Versailles, the fact that it was a coalition government prevented it making any real policies or important decisions. However the key factor for me has to be the poor handling of the economic crisis in particular the way in which Bruning reacted. Without a doubt, no matter how successful the SA was or Hitler was at public speaking, without Bruning's failures none of these Nazi strong points would have been there. The industrialist would not have needed to support the Nazi's, the SA would never have been as successful as they would not have had any audience's to appeal to and Hitler's qualities would never have surfaced. 1 Weimar Republic doc. 2 Mr Goulty's mum 3 Collier Germany 1919- 45 4 Phillip Pedley Germany 1919- 45 ...read more.