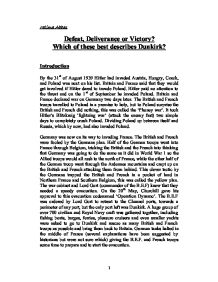 Defeat, Deliverance or Victory? Which of these best describes Dunkirk?

Fatima Abbas Defeat, Deliverance or Victory? Which of these best describes Dunkirk? Introduction By the 31st of August 1939 Hitler had invaded Austria, Hungry, Czech, and Poland was next on his list. Britain and France said that they would get involved if Hitler dared to invade Poland. Hitler paid no attention to the threat and on the 1st of September he invaded Poland. Britain and France declared war on Germany two days later. The British and French troops travelled to Poland in a promise to help, but to Poland surprise the British and French did nothing, this was called the 'Phoney war'. It took Hitler's Blitzkreig 'lightning war' (attack the enemy fast) two simple days to completely crush Poland. Dividing Poland up between itself and Russia, which by now, had also invaded Poland. Germany was now on its way to invading France. The British and French were fooled by the Germans plan. Half of the German troops went into France through Belgium, tricking the British and the French into thinking that Germany was going to do the same as it did in World War 1 so the Allied troops would all rush to the north of France, while the other half of the German troop went through the Ardennes mountains and crept up on the British and French attacking them from behind. This clever tactic by the Germans trapped the British and French in a pocket of land in Northern France and Southern Belgium, this was called the yellow plan. The war cabinet and Lord Gort (commander of the B.E.F) knew that they needed a speedy evacuation. On the 20th May, Churchill gave his approval to this evacuation codenamed 'Operation Dynamo'. The B.E.F was ordered by Lord Gort to retreat to the Channel ports, towards a perimeter of any port, but the only port left was Dunkirk. A huge group of over 700 civilian and Royal Navy craft was gathered together, including fishing boats, barges, ferries, pleasure cruisers and even smaller yachts were ...read more.

Although there seems to be a lot of facts and figures, showing that he has done good research. Source 20 is a short account by a German fighter pilot; it is his opinion of Dunkirk. He said that he went up and down spraying them (Allies) with bullets. The pilot claims it was 'cold blooded killing' this shows that he did not agree with the format of the battle, also it shows that the Luftwaffe killed a lot of Allied troops, this is indicated again when he said that the beaches were jammed with soldiers, this tells us how easily the soldiers were killed, this shows how badly prepared and trained the soldiers were. I know that soldiers only had two weeks of training at the height of the battle. From this information I gathered I knew that the soldiers did not have/use their anti aircraft guns. This is backed up b Source 14 (ii) when none of the soldiers would volunteer to even show another soldier how to use a Bren gun. But this disagrees with source 19, because it says that the soldiers would fire their rifles at the German planes. At the end of the day its only one persons account. The account is biased and because the source is primary evidence, it may have been used as a form of propaganda. But because there is no name and date, this may be totally made up by Germans for German propaganda. A lot of ammunition and war material was left behind on the beaches of Dunkirk because there was neither time nor room to take this equipment with them. Also a lot of boats and planes were lost. Using any relevant evidence, and your own knowledge of the topic, make a case for Dunkirk being a deliverance or victory for the British. There are many historians that argue that Dunkirk is a victory. ...read more.

The sources that support my view of Dunkirk, as being a military defeat are sources: 3, 4, and 20. However I do feel the Dunkirk was a military and a morale victory. As source 1 states 'Operation Dynamo succeeded beyond all expectations' this is true because Churchill had predicted that 30,000 men could be evacuated, whilst Admiral Ramsay had hopped for 45,000 men but to everyone' astonishment about 340,000 men were saved. Considering that this was a speedy evacuation thought up in a few days. I also think that Dunkirk was a morale victory. Churchill and the government had done a good job in using propaganda as a way of keeping morale high, this encouraged people to help in the war effort. People offered to sail their boats to Dunkirk. I know that vessel-pleasure boats, river ferries, fishing boats and even the smallest yachts went to Dunkirk to evacuate the troops. Although I seem to be favouring Dunkirk as being mostly a victory, overall my thoughts are that Dunkirk is a defeat, because if we think about it in reality the Allied troops were literally 'running away' from the Germans (however when the troops arrived home the nation saw them as being victorious), because if there was no other way Allied troops would have been killed by the Germans, but I think by halting the tanks Hitler purposely wanted to give a chance for the Allied troops to get away, because I know from my own knowledge that Hitler never wished to enter into a war with Britain. Because he 'admired the country whose empire he believed powerfully reinforced his ideas of racial domination'.out then all the So overall I conclude that although Dunkirk was partly a military defeat (amount of ammunition and machinery left behind) but it was also a military victory (number of men saved/evacuated) and a morale victory (all the nation had high spirit and helped in the war effort) Dunkirk Coursework Fatima Abbas Cardiff high School January 2004 1 ...read more.