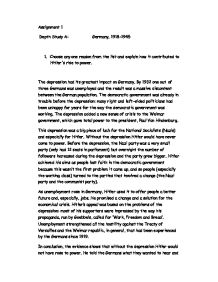 Assignment 1 Depth Study A: Germany, 1918-1945 1. Choose any one reason from the list and explain how it contributed to Hitler's rise to power. The depression had its greatest impact on Germany. By 1932 one out of three Germans was unemployed and the result was a massive discontent between the German population. The democratic government was already in trouble before the depression: many right and left-sided politicians had been unhappy for years for the way the democratic government was working. The depression added a new sense of crisis to the Weimar government, which gave total power to the president, Paul Von Hindenburg. This depression was a big piece of luck for the National Socialists (Nazis) ...read more.

Unemployment strengthened all the hostility against the Treaty of Versailles and the Weimar republic, in general, that had been experienced by the Germans since 1919. In conclusion, the evidence shows that without the depression Hitler would not have rose to power. He told the Germans what they wanted to hear and offered them a simple explanation for all their problems, the main one being unemployment: "More than fourteen years have passed since the unhappy day when the German people lost everything. Within four years, unemployment must be finally overcome." (Extract from a proclamation Hitler made on 1 February 1933, the day after he became chancellor) 2. Using some of the causes in the list explain how both long-term and short-term causes contributed to Hitler s rise to power. ...read more.

The section of the treaty that most angered the Germans was the 'war guilt' clause (they felt it was wrong to put the entire blame on Germany) and the payment of reparations. Hitler took the opportunity from this because, as he also hated the conditions of the Treaty of Versailles, he made promises to the Germans that he would remove any sign of the terms of the treaty. People believed in him because of his oratory abilities: he was very strong and very charismatic, he looked very confident of himself and by the way he spoke, he made people believe in him. The treaty of Versailles was the most important of the long-term causes because it gave Hitler the chance to exchange the same ideas he had with the rest of the Germans about the treaty of Versailles. ...read more.