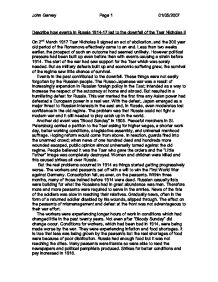 Describe how events in Russia 1914-17 led to the downfall of the Tsar Nicholas II On 2nd March 1917 Tsar Nicholas II signed an act of abdication, and the 300 year old period of the Romanovs effectively came to an end. Less than two weeks earlier, the prospect of such an outcome had seemed unlikely. However political pressure had been built up even before then with events causing a strain before 1914. The start of the war had saw support for the Tsar which was sorely needed. But as military defeats built up and economic suffering grew, the survival of the regime saw little chance of survival. Events in the past contributed to the downfall. These things were not easily forgotten by the Russian people. The Russo-Japanese war was a result of increasingly expansion in Russian foreign policy in the East; intended as a way to increase the respect of the autocracy at home and abroad. But resulted in a humiliating defeat for Russia. This war marked the first time any Asian power had defeated a European power in a real war. ...read more.

Within three months, many of those trained before 1914 were dead. Russian casualty lists were building for what the Russians had in great abundance was men. Therefore more and more peasants were required to serve in the armies. News of the fate of the soldiers was slow in reaching their relatives. Gradually news, often in the form of a returned soldier disabled by his wounds, slipped through. The effect on the peasants of mismanagement and defeat at the front was not advantageous to their war effort. The workers were experiencing longer hours of work in conditions which had changed little in the past twenty years. Not even after "Bloody Sunday" did change occur. Conditions for workers, which had been bad in 1914, were being made worse by the war. They were experiencing inflation and food shortages. It is true that less was being grown by the peasants but the real shortages of food were because of poor distribution. Russia had enough food but it was not reaching the cities. Many peasants were literate so were able to read the newspapers and political pamphlets produced. Strikes for better conditions and pay increased in 1916. ...read more.

All that was necessary to gain high office in Russia during this period was to gain the ear of Rasputin and, it was said, bribe him. From September 1915 to February 1917 Tsarist ministers were men of high aspirations but little ability. Such crushing incompetence was impossible to overlook and hardened the attitude of those who, now in increasing numbers, believed in the need of a change in government. The Tsar returned from the battlefront briefly at the beginning of 1917 and there was another round of dismissal of ministers but no new rulers were appointed. I believe that the downfall of the Tsar was down to many different reasons and events. The war and the casualties made everyone in Russia distraught and disheartened. The "German woman" (the Tsarina Alexandra) and Rasputin caused many conspiracies, people believed it was that the Germans were bringing down Russia. They were "German spies" in the eyes of Russian people. The lack of food supplies reached crisis point in 1917. Failure of the railway system to meet the demands of war. These are all massive reasons why the downfall of the Russian Tsar was made undeniable. -John Garvey ?? ?? ?? ?? John Garvey Page 1 01/05/2007 ...read more.