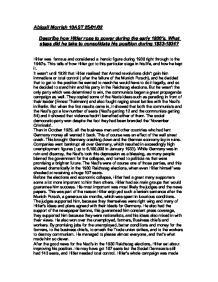 Describe how Hitler rose to power during the early 1930's. What steps did he take to consolidate his position during 1933-1934?

Abigail Morrish 10AST 25/01/02 Describe how Hitler rose to power during the early 1930's. What steps did he take to consolidate his position during 1933-1934? Hitler was famous and considered a heroic figure during 1930 right through to the 1940's. This tells of how Hitler got to this particular stage in his life, and how he kept it. It wasn't until 1928 that Hitler realised that Armed revolutions didn't gain him immediate or total control ( after the failure of the Munich Putsch), and he decided that to get to the position he wanted to reach he would have to do it legally, and so he decided to stand him and his party in the Reichstag elections. But he wasn't the only party which was determined to win, the communists began a great propaganda campaign as well. They copied some of the Nazis ideas such as parading in front of their leader (Ernest Thalmann) and also fought raging street battles with the Nazi's in Berlin. But when the first results came in, it showed that both the communists and the Nazi's got a low number of seats (Nazi's getting 12 and the communists getting 54) and it showed that violence hadn't benefited either of them. ...read more.

But then Hindenburg was faced with a new problem. One of his closest advisors Kurt Von Schleicher ( a leading army general) said the army wouldn't agree to Papen staying in office and this could start a civil war or a general strike. Hindenburg knew that no government could exist without the armies support so he had no choice but to fire Papen and appoint Schleicher instead. This was a very short lived career for Schleicher, he was chancellor for a brief fifty-seven days before Hindenburg got rid of him, after Schleicher had asked him to make emergency laws for him, after Scheleicher had told him that the army would rebel if the country was ruled by emergency laws. What choice had Hindenburg now? He called Hitler to his office, and he was sworn in on 30th of January 1933. But Hindenburg was more careful, he and Papen planned that he would be vice-chancellor, and only a few members of the government would be Nazi. They thought this guaranteed control over Hitler but it didn't last for over a few days. Hitler managed to persuade them that another election was necessary (his idea was to get the majority of the Reichstag Nazi). They agreed to this. ...read more.

This is known as 'The Night of Long Knives.' A month later President Hindenburg died aged 87. Presidency was immediately swapped over to Hitler and he had himself be known as ' Fuehrer and Reich Chancellor'. On the 2nd August 1934, officers and men of the army took an oath swearing their loyalty to Hitler and how they were willing to die for him and their country. The only people that could oppose Hitler, had been those men, and now they'd just sworn an oath to him. In conclusion Hitler managed to gain power by keeping himself the talk of Germany, using as much propaganda as he could to publicise himself, keeping a constant reign of terror with his private army, and legally working his way up to power through elections. He then managed to keep hold of this power by inserting new laws which made any other competition against the Nazi's impossible( and illegal),killing any competitors, any threats and any Anti-Nazi's. Hitler was a very clever man, and he managed to persuade most people at first that he was pleasing everyone, but I'm sure when their friends and family began being thrown into jail or shot, that they realised what they'd done, but then it was too late, Hitler had total control, and no one to oppose him. ...read more.