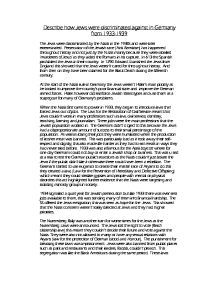 Describe how Jews were discriminated against in Germany from 1933-1939

Describe how Jews were discriminated against in Germany from 1933-1939

The Jews were discriminatedby the Nazis in the 1930s and were later exterminated.  Persecution of the Jewish race (Anti-Semitism) has happened throughout history and not just by the Nazis mainly because they were labelled ‘murderers of Jesus’ as they aided the Romans in his capture.  In 613 the Spanish prohibited the Jews in their country.  In 1290 Edward I banished the Jews from England this showed that the Jews weren’t cared for throughout history.  And from then on they have been blamed for the Black Death during the fifteenth century.

At the start of the Nazis rule in Germany the Jews weren’t Hitler’s main priority as he looked to improve the country’s poor financial state and improve the German armed forces.  Hitler however did reinforce Jewish stereotypes and use them as a scapegoat for many of Germany’s problems.

When the Nazis first came to power in 1933, they began to introduce laws that forced Jews out of jobs.  The Law for the Restoration of Civil Service meant that Jews couldn’t work in many professions such as law, civil service, dentistry, teaching, farming and journalism.  These jobs were the main professions that the Jewish population worked in.  The Germans didn’t object to this because the Jews had a disproportionate amount of success to their small percentage of the population.  As well as losing their jobs they were humiliated when the production of kosher meat was banned.  This was particularly bad as it took away their self-respect and dignity; this also made life harder as they had to eat meats in ways they had never tried before.  1933 was also infamous for the April boycott where for one day Germans could not buy or enter a Jewish shop or business.  This was used as a trial to test the German public’s reactions as the Nazis couldn’t just isolate the Jews if the public didn’t like it otherwise there could have been a rebellion.  The Germans started to use eugenics to create their master race of Aryans to do this they created a law, (Law for the Prevention of Hereditary and Defective Offspring) which meant they could sterilise gypsies and people with mental or physical disorders this act highlighted further evidence that the Nazis were targeting and isolating minority groups in society.

1934 signalled a quiet year for Jewish persecution but like 1933 there was even less jobs available to them, this was sending many of them into financial hardship.  The SS offered the Jews emigration; this was seen as hope for the Jews.  This showed that the Nazis concerns weren’t solely directed at Jews and they had higher priorities.

The Nuremberg Rally was another turn for worse times for the Jews as the Nuremberg Laws were announced.  The Jews lost the right to vote (Reich citizenship law) this meant they couldn’t decide their future and vote against the Nazis. They were also not allowed to marry or have any sexual relations with Aryans (law for the protection of German blood and honour).  The punishment for breaking these laws was imprisonment.  Jews were also banned from public places such as park and restaurants and their leaders, Rabbis, couldn’t preach.  This segregation was like the Black Americans during the same period.  These laws basically made the Jewish population worthless and it was further humiliation for them.  Newspapers and books by Jews were banned and Jewish writers were arrested.  The Nazis also assumed many Jews were writers and this would defeat their spirit.

The 1936 Berlin Olympics signalled a great rise in politic status for Nazi Germany.  This was good for the Jews as obvious Anti-Semitic behaviour temporally halted, as the Nazis didn’t want the rest of the world to find out about their persecution of minority groups.  But this didn’t mean that the Jews didn’t get persecuted, they couldn’t become vets anymore and had even less jobs available to them.  The Jews also felt that they had more hope, as it seemed Himmler wanted to help them as he organised many Jewish emigration organisational schemes.  This also suggests that the Nazis only wanted to emigrate and rid the country of Jews.

1937 may have been a quiet year for Jewish persecution like 1934 and 1936 but it heralded new heights for Gypsy persecution, as they had to be photographed, finger printed and registered.  Schact, the Nazi minister for Economics, resigns this signals that the Nazis policies and priorities are beginning to change.

1938 was the turning point in Jewish persecution.  During the night of November 9-10th, Kristallnacht, Night of Broken Glass, there was a pogrom against the Jews.  In this horrific attack over a thousand synagogues were burnt, homes and businesses smashed and twenty thousand Jewish men were rounded up and sent to concentration camps.  This is when the Nazis used violence and a sign for things to come.  This was a different type of persecution, this highlights that priorities were changing; the Nazis stopped using Laws and propaganda and just used blatant attacks of physical violence.  Although the Jews wanted to emigrate it was near impossible because the Nazis only let them leave if they gave up all their possessions and in many cases they lost their passports.  This shows the Nazis were finding it hard to isolate them and emigrate them and easier to contain them in concentration camps and ghettos.

The last year before the war seemed a very quiet year compared to Kristallnacht but even then Jews were being evicted without any reason or notice.

When Hitler came to power in 1933 it seemed like a revolution Germany had power back and over the years leading up to the war it seemed as though Hitler just wanted to emigrate them and not exterminate them.  The Jews didn’t see the Holocaust coming as there was no certain plan and the Nazis acted in a very erratic way.  The persecution escalated between 1933-1939 because Hitler rebuilt the country and then had the destruction of the Jews as his sole aim.