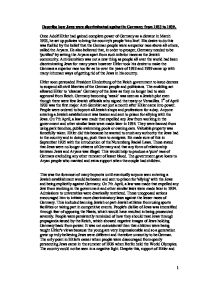 Describe how Jews were discriminated against in Germany from 1933 to 1939. Once Adolf Hitler had gained complete power of Germany as a dictator in March 1933, he set up policies to bring the country's people 'into line'. His desire to do this was fuelled by the belief that the German people were a superior race above all others, called the Aryans. He also believed that, in order to prosper, Germany needed to be 'purified' by setting the Aryans apart from such inferior races as the Jewish community. Anti-Semitism was not a new thing as people all over the world had been discriminating Jews for many years however Hitler took his desire to make the Germans a superior race too far as he over the years of 1933 and 1939 came up with many inhuman ways of getting rid of the Jews in his country. Hitler soon persuaded President Hindenburg of the Reich government to issue decrees to suspend all civil liberties of the German people and politicians. ...read more.

On 7th April, a law was made that expelled any Jew from working in the government and other similar laws were made later in 1934. Admissions to universities were drastically restricted. These unopposed actions encouraged him to initiate more discriminatory laws against the lesser races of Germany. This included banning Jewish or part-Jewish athletes from using sports facilities or taking part in competitive events. People's dislike of Jews was intensified through fear of opposing the Nazis, which would have resulted in being prosecuted severely. People were persistently reminded of how they should treat Jews through propaganda issued by the Reich, which showed negative images of Jews holding Germany back from power. It was not coincidental then that children were being taught Hitler's views because the young are very impressionable and so a generation grew up truly believing Jews were different and therefore unworthy to be German. The only point in Hitler's career when people were discouraged from openly persecuting Jews came in the summer of 1936 when Berlin held the World Olympics. ...read more.

This great exercise in anti-Semitism served to encourage people to use Jews as scapegoats. A lot of people now stood united with Hitler and his campaign to dehumanise the Jews. Throughout 1939 more laws were set up to restrict the Jews in any way possible. Despite Hitler's various attempts at securing anti-Semitism in all Germans, there were those who were not in favour of his ideals, but could not do much to stop the endless outburst of hate directed at the Jews. When it became compulsory and military training was introduced, one million people refused to join the Hitler Youth Movement. People were afraid of being associated with Jews because Hitler used force as well as the legal system to prosecute any who opposed him. Hitler pitted himself against all those against the 'Aryan' way of life so Germany could become a 'pure' master state. The Jews were treated extremely unjustly from the very beginning of Hitler's seizure of power and the level of discrimination rose to such a height that it was immensely difficult and virtually impossible to end. ?? ?? ?? ?? 1 ...read more.