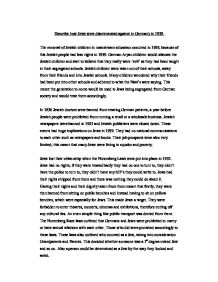 Describe how Jews were discriminated against in Germany in 1939.

Describe how Jews were discriminated against in Germany in 1939. The removal of Jewish children in mainstream education occurred in 1938, because of this Jewish people had less rights in 1939. German Aryan children would alienate the Jewish children and start to believe that they really were 'evil' as they had been taught in their segregated schools. Jewish children were taken out of their schools, away from their friends and into Jewish schools. Many children wondered why their friends had been put into other schools and adhered to what the Nazi's were saying. This meant the generation to come would be used to Jews being segregated from German society and would treat them accordingly. ...read more.

Jews lost their citizenship when the Nuremberg Laws were put into place in 1935. Jews had no rights, if they were treated badly they had no one to turn to, they didn't have the police to turn to, they didn't have any MP's they could write to. Jews had their rights stripped from them and there was nothing they could do about it. Having their rights and their dignity taken from them meant that firstly, they were then banned from sitting on public benches and instead having to sit on yellow benches, which were especially for Jews. This made Jews a target. They were forbidden to enter theatres, concerts, cinemas and exhibitions, therefore cutting off any cultural ties. ...read more.

The most famous of these ghettos was The Warsaw Ghetto. Over half a million Jews were held in a 1.3 square mile of space. This meant there were averagely 7 families living each house. They had no running water and very little food. Money, gold and other such jewellery was useless in the ghettos. They could not trade with these things anymore. Food is what many of the Jews in the ghettos needed, so they traded with it. Many were starving and many were ill and dirty. This is just the start of how Jews were discriminated against. Basically Jews had their civil rights, and dignity taken away from them by 1939. This meant they couldn't vote, or even protest, they couldn't change what was happening to them. This was the start to the Nazi's answering the Jewish Question. ...read more.