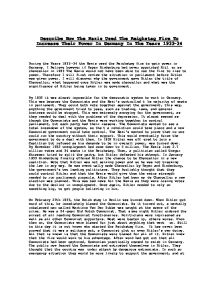 Describe How The Nazis Used The Reighstag Fire To Increase Their Power In Germany In The Years 1933-34 During the Years 1933-34 the Nazis used the Reichstag fire to gain power in Germany. I Believe however if Papen Hindenburg had never appointed Hitler as chancellor in 1933 The Nazis would not have been able to use the fire to rise to power. Therefore I will first review the situation in parliament before Hitler was given power. I will discover why the government gave Hitler the title of Chancellor, what happened once Hitler was made chancellor and what was the significance of Hitler being taken in to government. By 1932 it was almost impossible for the democratic system to work in Germany. This was because the Communists and the Nazi's controlled the majority of seats in parliament. They could both vote together against the government, this way, anything the government tried to pass, such as trading, laws, and general business could be stopped. This was extremely annoying for the government, as they needed to deal with the problems of the depression. It almost seemed as though the Communists and the Nazis were working together to control parliament, but each party had their reasons. The Communists wanted to see a total breakdown of the system, so that a revolution could take place and a new Communist government could take control. ...read more.

All that is known is that the Communists were blamed for all of it. Hitler knew that the fire would work to his advantage. After word had got out that all Communists had been captured, Communism practically ceased to exist in Germany. The public now feared the Communists and entrusted themselves in Hitler. They thought that the country was under attack by dangerous extremists. In such an emergency situation they would be more likely to support the government, and at the time, the Nazis were the government. Hitler now had the nation exactly where he wanted it. Thanks to the fire, the Nazis won the 1933 election with 17 million votes and 288 seats. As soon as Hitler became Chancellor, he appointed Herman Goering, another Nazi, as Minister of the Interior. Goering was now in charge of the police and the prisons. This way Hitler could use the police to round up his opponents once the fire had given him an excuse. So the end result was that by being chancellor he could take full advantage of the Reichstag Fire and the Nazis were able to win the election. This was a short-term cause for Hitler's rise to power. Obviously it was a stepping stone into his overall rise, but Papen and Hindenberg clearly underestimated Hitler. ...read more.

He had worn them down but in another way had pulled them up so that he could achieve the power that he wanted. Some people say that Hitler was very clever in the way that he handled the Situation, others say he was very lucky. The answer is that he was clever and lucky. He was lucky because of the occurrence of the great depression and the Reichstag Fire. Surely without these two elements he wouldn't have got anywhere near to achieving the role of chancellor, that is why they were so important. Still, it was simply a case of good timing. However, we also cannot dispute the fact, that he handled these situations excellently. When the depression came Along, he told the German people he would get them out of it and he did. It is possible to say that if he hadn't plagued and brainwashed the German people with his racist and destructive views, he would be one of the most memorable politicians in Germany's history. Then he had to deal with the Reichstag Fire. The answer he found was obvious. Blame the Communists, Hitler's opponents to the forthcoming election. That was all that was needed to win the election. As soon as Hitler told the German people that the Communists had started the fire, they fell for it and supported Hitler in his rise to power. ...read more.

Response to question - To what extent has the student answered the set question? How explicit is their response?
The student clearly has an understanding of the question set, but fails to structure it to their advantage and at times, ...

Response to question - To what extent has the student answered the set question? How explicit is their response?
The student clearly has an understanding of the question set, but fails to structure it to their advantage and at times, there are a few confusing statements or assertions made. The Reichstag Fire should have dominated the essay, but instead, other factors stood out in the essay which slightly undermined the wording of the question. The introduction and conclusion does not serve the purpose for an essay and it does not add to the studentÃ¢â‚¬â„¢s argument. The points that the student makes (whilst not always necessarily relevant) are supported by strong evidence giving the essay a strong line of argument and there are only a few occasions where the evidence has been weak, however, there are narrative sections in the piece as well. Personally, I would not have gone into so much detail about what happened before Hitler became chancellor as I donÃ¢â‚¬â„¢t think it is that relevant to the question set.

Level of analysis - To what extent does the writer show appropriate analytical skills for this level of qualification? Have they made evaluative judgements using suitable evidence? Have these examples been developed throughout the response and has an appropriate conclusion been reached?
For GCSE, historiography is not necessary but there is a need to understand the different viewpoints of people living in the period in comparison to others with hindsight. The student tends to assert their view (with hindsight) to reason why (for example) Hitler acted as he did. This undermines the other factors that could have influenced his decision making. The understanding of Nazi Germany is not doubted, but the student references their understanding only by modern terms and lacks adding in the opinions of the Germans living in Nazi Germany.
On most occasions, the student has stated their point of opinion and supported it with relevant detail. However, they fail to acknowledge the other side of the story or omit the other factors involved in the topic. Most textbooks (and indeed web sources) state that Hitler was a great leader and was adept at manipulating propaganda and it appears that the student has taken the textbooks very literally and has asserted this in the essay without sufficient evidence to back it up. This, unfortunately, does no favours to the marks.
The appropriate conclusion was reached, but the conclusion contained too many assertions for it to be convincing. The examples used, whilst strong at times, were under developed Ã¢â‚¬â€œ a common pitfall for most GCSE students, such as the importance of the Enabling Act. The simplest way to tackle this problem is remembering Point, Evidence, Explain (PEE). The explanation is what is most lacking in this essay to score it top marks. The point and evidence are virtually useless without explaining them in relation to the question and your argument.

Quality of writing - Is the writing accurate in terms of spelling, grammar and punctuation? Has the writer used technical terms expected at this level of qualification? To what extent does the writer follow conventions and expectations for written work at this level?
The spelling, grammar and punctuation are mostly fine with one or two places which are questionable. There were no technical terms used and this was not necessary either. Through the usage of Ã¢â‚¬Å“IÃ¢â‚¬Â, it is obvious what the studentÃ¢â‚¬â„¢s line of argument is throughout the essay but perhaps the word is best avoided. The fluency of the essay could be improved as there was a lack of linkage between the paragraphs Ã¢â‚¬â€œ again something that many GCSE students find hard to do. The structure of the essay could be improved such that there are perhaps only 5 -6 paragraphs maximum. These paragraphs may be lengthy but would serve the student better than lots of smaller paragraphs. For this essay, I would outline Ã¢â‚¬ËœsectionsÃ¢â‚¬â„¢ as: introduction (including any background knowledge to set the scene, such as the cause of the Reichstag Fire), how the Reichstag Fire was used to increase power (i.e. the Reichstag Fire consequences), other factors which also gave the Nazis more power and finally the conclusion.