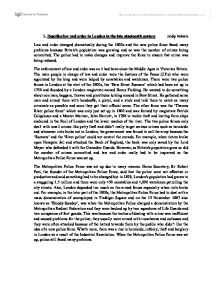 Describe law and order in London in the late nineteenth century

1. Describe law and order in London in the late nineteenth century Jaidip Vekaria Law and order changed dramatically during the 1800s and the new police force faced many problems because Britain's population was growing and so was the number of crimes being committed. The police had to make changes and improve the force to ensure that crime was being reduced. The enforcement of law and order was as it had been since the Middle Ages in Victorian Britain. The main people in charge of law and order were the Justices of the Peace (J.P.s) who were appointed by the king and were helped by constables and watchmen. There were two police forces in London at the start of the 1800s, the 'Bow Street Runners' which had been set up in 1750 and founded by a London magistrate named Henry Fielding. He wanted to do something about con men, beggars, thieves and prostitutes lurking around in Bow Street. He gathered some men and armed them with handcuffs, a pistol, and a stick and told them to catch as many criminals as possible and soon they got their official name. ...read more.

This was because the tactics of dealing with crime was inefficient and caused problems for the police; they usually were armed with truncheons and cutlasses and they were often attacked because of the hatred towards them by the public who didn't like the idea of a new police force. What's more, there was a rise in homicide, robbery, theft and burglary in London as a result of the Industrial Revolution. When the Metropolitan Police Force was set up, police still faced many problems. During the early years of the Metropolitan Police Force, they were met with many problems. One major issue was the fact the recruits were not suitable, they were often very drunk and many resigned or were sacked from the force. The recruits also only had a little training such as marching/drilling; they were not trained to solve crimes and only to stop crowds. Also, the public, mainly working class people, truly hated the police and they often attacked them and in one instance some policemen, or 'bobbies' and 'peelers' as the police were called because of their founder Sir Robert Peel, were run over by a coach and were seriously injured. ...read more.

However, the methods used by detectives to solve murders were not advanced; they only had just learnt the usefulness of footprints. On the other hand, there was some forensic advancement when a torn paper used for pistol wadding matched the paper recovered from the wound in the victim. In 1879, some rules were made when a murder had taken place such as not touching the victim's body until it was analysed. Also, in the early twentieth century, the police first used photographs to keep profiles of criminals and also to take photos of crime scenes as evidence. There was also further progress when fingerprinting was introduced in the early twentieth century and in 1902 the first person was convicted due to fingerprinting. Police developments grew dramatically during the late nineteenth century. Overall, law and order improved significantly over the course of the nineteenth century. By 1900, the police force had changed considerably and made some improvements since the early 1800s such as having a detective department within the Metropolitan Police Force. Although the new force had improved, they were still by far not the best police force as their tactics in solving crime was still not very efficient but the police were really trying to prevent and solve crimes at any rate during the 1800s. ...read more.