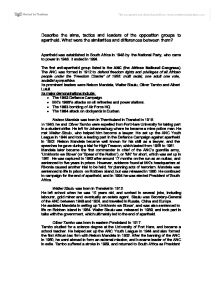 Describe the aims, tactics and leaders of the opposition groups to apartheid. What were the similarities and differences between them?

Describe the aims, tactics and leaders of the opposition groups to apartheid. What were the similarities and differences between them? Apartheid was established in South Africa in 1948 by the National Party, who came to power in 1948. It ended in 1994. The first anti-apartheid group listed is the ANC (the African National Congress). The ANC was formed in 1912 to defend freedom rights and privileges of all African people under the 'Freedom Charter' of 1955: multi racial, one adult one vote, socialist sympathies. Its prominent leaders were Nelson Mandela, Walter Sisulu, Oliver Tambo and Albert Lutuli. Its major demonstrations include: * The 1952 Defiance Campaign. * MK's 1960's attacks on oil refineries and power stations. * The 1983 bombing of Air Force HQ. * The 1984 attack on dockyards in Durban. Nelson Mandela was born in Thembuland in Transkei in 1918. In 1940, he and Oliver Tambo were expelled from Fort Hare University for taking part in a student strike. He left for Johannesburg where he became a mine policeman. He met Walter Sisulu, who helped him become a lawyer. He set up the ANC Youth League in 1944 and took a leading part in the Defiance Campaign against apartheid in 1952. Nelson Mandela became well known for his skill as a lawyer, and the speeches he gave during a trial for High Treason, which lasted from 1956 to 1961. ...read more.

Albert Lutuli was one of the 156 people put on trial for high treason in 1956. He publicly burnt his pass book after the Sharpeville Massacre. Lutuli received the Nobel Peace Prize in 1961, and was killed in a railway accident six years later. The second anti-apartheid group listed is the PAC (the Pan African Congress). The PAC split from the ANC and was formed in 1959 with the aim of a government of South Africa by black Africans. Its prominent leader was Robert Sobukwe. Its major demonstrations include: * The 1960 Sharpeville anti-pass law campaign (69 demonstrators killed, 180 wounded) Robert Sobukwe was born in 1924. Sobukwe joined the ANC Youth League in 1947, and became a language teacher at the University of Witwatersrand in 1954. Robert wasn't happy about the influence of Indians, communists and white liberals in the ANC. In 1959 he left the ANC and created the PAC. In 1960, Sobukwe was arrested for leading the PAC protest against Pass Laws, which resulted in the Sharpeville Massacre. He was imprisoned for 3 years in prison in the Transvaal, and 6 more years on Robben Island. When he was released, he was banned from politics. Sobukwe died of cancer in 1978. The third anti-apartheid group listed is the SASO (the South African Student's Organisation). The SASO was formed in 1969 with the aim to promote ideas of black consciousness. ...read more.

The fourth anti-apartheid group listed is the UDF (the United Democratic Front). The UDF was formed in 1983, and followed the aims of the Freedom Charter. It also opposed elections to new community councils in 1983 and new Parliament in 1984, which still excluded black people. Its prominent leader was Albertina Sisulu. Its major demonstrations include: * 1984 - Involvement in a major rebellion in the townships of the Vaal triangle which spread throughout 1985 The groups listed above all wanted everyone to have the right to vote. They also wanted a fair and more equal society, as well as supporting Nelson Mandela's release from prison. The ANC and UDF supported the Freedom Charter. However, different ideals, aims and beliefs caused conflict - which was encouraged by the government. The ANC wanted a multi racial government, economic sanctions and supported the Freedom Charter. This caused conflict with the PAC who wanted a black government, and Inkatha, who opposed the sanctions and wanted to work with white businesses. The ANC was also criticized by Inkatha because of its guerrilla attacks, and the ANC in turn criticized Inkatha's leader Buthelezi for his willingness to work with white businesses. Conflicts continued all the way until the end of apartheid, aided by the government - and its alleged lending of weapons to the PAC for fighting against other parties. Turner 4 ...read more.