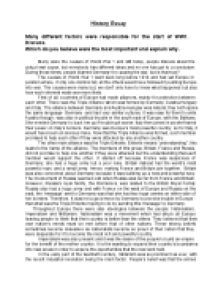 Describe the Causes of WW1

﻿History Essay Many different factors were responsible for the start of WW1. Discuss. Which do you believe were the most important and explain why. Many were the causes of World War 1 and still today, people discuss about the actual real cause, but everybody has different ideas and no one has got to a conclusion. During those times, people blamed Germany for causing the war, but is that true? The causes of World War 1 went back long before 1914 and had set Europe in position where, if only one domino fell, all the others would have followed it pushing Europe into war. The causes were many but, we don't only have to know what happened but also how each element made war more likely. First of all, countries of Europe had made alliances, mainly for protection between each other. There was the Triple Alliance which was formed by Germany, Austria-Hungary and Italy. The alliance between Germany and Austria-Hungary was natural; they both spoke the same language- Germany -and had very similar cultures. It was easy for them to unite. Austria though, was also in political trouble in the south east of Europe, with the Balkans. She needed Germany to back her up if trouble got worse. ...read more.

So, to challenge Britain, Germany built Dreadnought battleships which were also really powerful. Britain's navy was now threatened by by Germany's one so an armed race begins. The Anglo-Japanese naval alliance is signed between Britain and Japan. By 1914, the British navy was much larger than the German navy; people argue that then this is not a cause of WW1. Then what came by was the First Moroccan Crisis, in 1906. Here, France hoped to conquer Morocco, in Africa, and that the British would help them. Although this didn't happen because Kaiser Wilhelm visits Morocco and guarantees its protection. France is now furious with Germany and feels threatened; the British also saw this as another attempt of Germany to build its Empire to rival Britain's Empire. In 1907, Britain, France and Russia are now alarmed by Germany; this is when the Entente is formed. Then comes the Bosnian Crisis in 1908; Austria-Hungary wants to renew its empire by annexing the Balkans. The Serbian nationalism grows and so does a sense of brotherhood between the Slavic people. There was a revolution in Turkey so Austria-Hungary took advantage of this to take over the Turkish state of Bosnia. Russia is stopped by helping Serbia by France and Britain and is humiliated by Austria-Hungary. ...read more.

I think people might discuss that the assassination of Franz Ferdinand was the main cause. I do agree with this, but not fully. I think that this will never have happened if it wasn't for this wanting to be better, for the competition in fighting between the European countries. If there wasn't any tension, then nobody would have started mobilizing. Just like what happened in the Boer War of 1899-1900 where Britain was fighting a colonial war to conquer South Africa and Germany interfered just because it wanted to, supporting the Boers and announcing that Britain had no right to conquer it. This made Britain develop the idea that Germany wanted to challenge Britain's role as a world empire. I think this was the most important cause out of all. Does this answer our previous question though? ?Is Germany the cause of WW1??. It might have been since it interfered without minding its own business, but wars do not happen from one day to the other with just one reason for fighting. It takes longer for people to reflect and see what will happen next, like Britain did, it waited to see if Germany really wanted to challenge Britain but ended that many other things came about. (1627 words) Beatrice Ferro 9A Beatrice Ferro 9A Beatrice Ferro 9A ...read more.