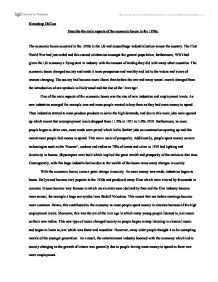 Describe the main aspects of the economic boom in the 1920s.

Kirandeep Dhillon Describe the main aspects of the economic boom in the 1920s. The economic boom occurred in the 1920s in the US and caused huge industrialisation across the country. The First World War had just ended and this caused celebration amongst the general population, furthermore, WWI had given the US economy a flying start in industry with the amount of trading they did with many other countries. The economic boom changed society and made it more prosperous and wealthy and led to the values and views of women changing. The society had become more liberal than before the war and many sexual morals changed from the introduction of sex symbols in Hollywood and the rise of the 'Jazz age'. One of the main aspects of the economic boom was the rise of new industries and employment levels. As new industries emerged for example cars and more people wanted to buy them as they had more money to spend. Thus industries started to mass produce products to serve the high demands, and due to this more jobs were opened up which meant that unemployment levels dropped from 11.9% in 1921 to 3.9% 1929. ...read more.

Hence, this contributed to the economy as more people spent money in cinemas because of the high employment levels. Moreover, this was the era of the Jazz age in which many young people listened to jazz music on their new radios. This new type of music changed society as people began to stop listening to classical music and began to listen to jazz which was faster and raunchier. However, many older people thought it to be corrupting morals of the younger generation. As a result, the entertainment industry boomed with the economy which led to society changing as the growth of leisure was generally due to people having more money to spend as there was more employment. Furthermore, the women's and teenagers' attitudes changed dramatically with the economic boom. As the war had ended, women were already more independent as they worked rather than stayed at home when the men were fighting. When the war was over, women demanded to work and live a more liberal life to show themselves as equals toward men. Moreover, women were soon given the right to vote which boosted confidence and equality between genders. ...read more.

Overall, women and teenagers benefited from the economic boom. However, some people did not benefit from the economic boom. As the nation was industrialising rapidly and mechanization of industries meant that workers would lose jobs as machines were far more efficient. Mostly farming and coal industries were affected and resulted to minor unemployment. Furthermore, some sectors of society did not benefit from the economic boom. Immigrants such as black people still suffered from segregation and were treated as the inferior members of society. This would include the lower jobs and racial discrimination from white people. Therefore many immigrants and poorer people working in the primary field of employment did not gain from the economic boom. Overall, the economic boom changed society dramatically as it meant that there was a rise of new and old industries which influenced many groups in society including women and teenagers. The overall change made the society promiscuous and boosted the confidence of many. Furthermore, the nation became more industrialised which opened new jobs however it caused unemployment for some sectors of society. The economic boom had been, overall a beneficial era in American history as it brought prosperity into the country. ...read more.