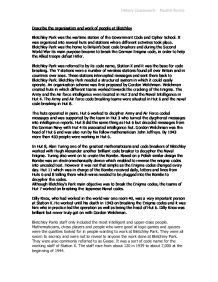 Describe the Organisation and work of the people at Bletchley Park

Describe the organisation and work of people at Bletchley Bletchley Park was the wartime station of the Government Code and Cipher School. It was organized into several huts and stations where different activities took place. Bletchley Park was the home to Britain's best code breakers and during the Second World War its main purpose became to break the German Enigma code, in order to help the Allied troops defeat Hitler. Bletchley Park was referred to by its code name, Station X and it was the base for code breaking. The Y stations were a number of wireless stations found all over Britain and in countries over seas. ...read more.

Gordon Welchman was the head of Hut 6 and was also run by his fellow mathematician John Jeffreys. By 1943 more than 450 people were working in Hut 6. In Hut 8, Alan Turing one of the greatest mathematicians and code breakers of Bletchley worked with Hugh Alexander another brilliant code breaker to decypher the Naval Enigma. Turing also went on to create the Bombe. Based on a Polish similar design the Bombe was an electromechanically device which enabled to reverse the enigma codes into uncoded text. However it was not that simple as the Enigma codes changed every day. Hut 11 which was in charge of the Bombe received daily, letters and lines from Huts 6 and 8 telling them which wires needed to be plugged into the Bombe to decypher the codes. ...read more.

They were all sworn to secrecy and were not to reveal to anyone the work done at Bletchley Park. They were also commonly referred to as Geese. It was a sort of code name for the working staff of Station X. The staff rose from about 120 in 1939 to about 7,000 at the beginning of 1944. Of course that staff was not entirely crypt analytical, it consisted also of an immense amount of staff used, for example, for signaling the products to commands in the rest of England or abroad. After the war many of the 10,000 people who worked and had participated at Station X remained silent and it was only in the 1970's that the activities of Bletchley Park were revealed to the general public. ...read more.