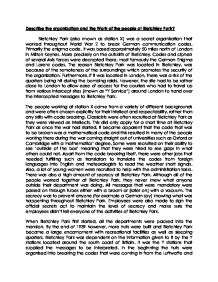 Describe the organization and the Work of the people at Bletchley Park? Bletchley Park (also known as station X) was a secret organization that worked throughout World War 2 to break German communication codes. Primarily the enigma code. It was based approximately 50 miles north of London in Milton Keynes. More precisely on the outskirts of Bletchley. Codes and ciphers of several Axis forces were decrypted there, most famously the German Enigma and Lorenz codes. The reason Bletchley Park was located in Bletchley, was because of the remoteness of the surroundings which promotes the security of the organization. Furthermore, if it was located in London, there was a risk of the quarters being hit during the bombing raids. However, the site had to be rather close to London to allow ease of access for the couriers who had to travel up from various intercept sites (known as "Y Service") around London to hand over the intercepted messages to Bletchley Park. The people working at station X came from a variety of different backgrounds and were often chosen explicitly for their intellect and respectability, rather than any skills with code breaking. ...read more.

with a vacuum. This secrecy was to prevent anyone (for example a German spy) knowing what was happening throughout Bletchley Park. Employees were also made to sign the official secrets act to maintain the level of secrecy and make sure the employees didn't tell everyone of the activities of Bletchley Park. When Bletchley Park first started, all the departments were packed into the mansion. By the end of 1939 however, more huts were built and Bletchley Park became a large encampment with recreational facilities as well as sleeping quarters. Bletchley Park was dependent on the information given to it by the Y stations located around the south coast of Britain. It was the Y stations that supplied the messages to be interpreted. In the beginning the huts were organised into breaking the codes that were coming in from the Luftwaffe and the Wehrmacht. This was performed in hut 6; when the code had been cracked it was then sent to hut 3 to be interpreted by translators. When the message was deciphered it was then prioritised from 1 to 4. ...read more.

This of course accelerated the process in which the enigma was eventually broken. The work that went on at Bletchley Park varied from hut to hut. For example, the cryptanalysis of the Luftwaffe and the Wehrmacht was handled in hut 6 whilst the Kriegsmarine messages were sent to Hut 8. Hut 3 was in charge of analyzing and interpreting Enigma decrypts of the Wehrmacht and the Luftwaffe. The Interpreting of the naval codes was left to hut 4. Generally, the Kriegsmarine codes were more difficult to crack which was why there were whole huts dedicated to the naval codes. Hut 7 was also used for naval decryption however this hut only worked on the Japanese codes. Hut 10 housed the meteorological section, hut 11 was where the first bombe machine was made and hut 14 was the main teleprinter building that received the messages from the Y stations. I think that the work in Bletchley Park did a great deal to aid the allies war effort, the mystery that was so thoroughly maintained in Bletchley Park was an important factor in the organization of Bletchley Park. People from all walks of life coming together and working hard was something that greatly helped the war effort. Shayan Moghaddam ...read more.