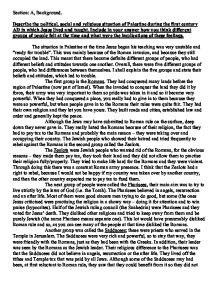 Describe the political, social and religious situation of Palestine during the first century AD in which Jesus lived and taught

Section: A, Background. Describe the political, social and religious situation of Palestine during the first century AD in which Jesus lived and taught. Include in your answer how you think different groups of people felt at the time and what were the implications of these feelings. The situation in Palestine at the time Jesus began his teaching was very unstable and "ready for trouble". This was mainly because of the Roman invasion, and because they still occupied the land. This meant that there became definite different groups of people, who had different beliefs and attitudes towards one another. Overall, there were five different groups of people, who had differences between themselves. I shall explain the five groups and state their beliefs and attitudes, which led to trouble. The first group is the Romans. They had conquered many lands before the region of Palestine (now part of Israel). When the invaded to conquer the land they did it by force, their army was very important to them so pride was taken in it and so it became very powerful. When they had conquered a place, you really had to give in to them because they were so powerful, but when people gave in to the Romans their rules were quite fair. ...read more.

Another group was called the Sadducees; these were priests who served in the Temple in Jerusalem. The Sadducees were very rich and powerful, so to stay that way, they were friendly with the Romans, just as they had been with the Greeks. In addition, their leader was seen by the Romans as the Jewish leader. Their religious difference to the Pharisees was that the Sadducees did not believe in angels, resurrection or the after life. They lived off the tithes and Temple tax that was paid by all Jews. Although some of the Sadducees may had been, at first reluctant to Roman rule, they saw that they could benefit from it so they did not rebel. The fact that they didn't rebel can be seen from two angles, one (the positive) that they were being smart - there was no way they could defeat them so - "If you can't beat them, join them" they could have thought, or you could see it as being unfaithful, a traitor to the Jewish people and religion. Finally, the last group was "The people". Just the ordinary every day people who lived hard simple lives, growing crops, herding sheep or working as potters or weavers - just the working class people. ...read more.

If they were not what they wanted them to be, then there was a dislike instantly towards Jesus. Overall, no one liked the Romans, the Sadducees were being selfish and looking after themselves - so people disliked them. The Pharisees only wanted to be Jewish and nothing else - they did not want the Romans interfering with their religion. The Zealots hated the Romans and were constantly trying to attack them, because their land was being stolen from them and they could not worship properly. The Romans wanted to take over peacefully, collect money from the people in the country and every one to obey them - which made every one hate them. Finally the people who only wanted to have more comfortable lives, all they wanted was the Messiah that God had promised them. I think the ordinary people would have disliked to some extent the Temple because it was costing them money and before Jesus cam, no benefit to them. The implications of each group's feelings meant that eventually, sooner rather than later something was going to happen. Overall, I think Jesus would either be loved, and seen as saving them, or hated, and all of the people's bad feelings took out on him. ...read more.