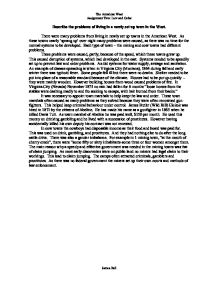 Describe the problems of living in a newly set up town in the West. There were many problems from living in newly set up towns in the American West. As these towns nearly 'sprang up' over night many problems were caused, as there was no time for the normal systems to be developed. Each type of town - the mining and cow towns had different problems. These problems were caused, partly, because of the speed, which these towns grew up. This caused disruption of systems, which had developed in the east. Systems needed to be speedily set up to prevent law and order problems. As did systems for water supply, sewage and sanitation. An example of disease spreading is when in Virginia City (Montana), 1864 during fall and early winter there was typhoid fever. Some people fell ill but there were no deaths. Shelter needed to be put into place of a reasonable standard because of the climate. Houses had to be put up quickly -they were mainly wooden. However building houses from wood caused problems of fire. In Virginia City (Nevada) November 1875 no rain had fallen for 6 months "loose horses from the stables were dashing madly to and fro seeking to escape, with hair burned from their backs." ...read more.

There were many different ethnic groups there were many racial differences, plus no one was willing to forget the events of the civil war. This led to racist violence, the worst incident took place in 1885 at a coal mining centre, Rock Springs, Wyoming, when 51 Chinese were killed and over 400 others were expelled from the town. A further cause were the vigilantes as they were all from the nearby area and may have discriminated against outsiders. An economic factor is that people originally moved west to make money meaning it was an important factor. Bank robbery and train robbery were two economic based crimes. Butch Cassidy and the Wild Bunch were famous train robbers between 1870 and 1880. Their crimes were made easier partly due to the large distances that had to be travelled in the West. Robberies could take place far from the nearest town. The speed with which the towns in the West developed meant that it was difficult to create systems of law and order quickly. No factor seems to me to be more important than another in creating lawlessness and violence but they are all linked together to produce an area that is highly likely to have a lack of law. ...read more.

Also the cowboys had just returned from a long, tiring cattle drive and would have wanted to relax so they used their money on the prostitutes, drink and gambling. In San Francisco alone it is estimated that there were 10,000 prostitutes in the 1880's. However some women did a lot to help in new towns on the west. They campaigned for curbs on alcohol that was wrecking many families and even managed to persuade Kansas to introduce prohibition in 1860. They also helped to change the value and attitudes of people in the West playing a vital role in educating children and setting up churches and persuading their men to attend. Both vigilantes and women played an important part in the new towns of the West. They both caused problems and solved them but I think that women were more influential in solving problems than vigilantes. All that vigilantes prevented was lawlessness and violence and come loss of money from the state. However women helped prevent lawlessness and violence by introducing new moral codes and they also prevented town ceasing to function as they ran important business while men were working, such as Sallie Frazier who ran a restaurant in Dodge City. The American West Assignment Two: Law and Order James Bell ...read more.

This gets four starts because the answers are very well focussed on the topics. The main way to develop these answers is to include more specific accurate and relevant examples in each paragraph.