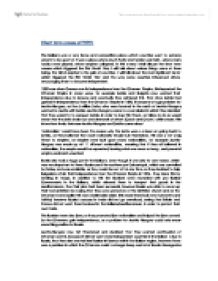 Short term causes of WW1 The Balkans was a very fierce and competitive place which countries went to extreme extents to be apart of. It was a place where much rivalry and tension was held, where many tactics were played, where empires collapsed. In this essay I shall discuss the short term causes which triggered the First World War; I will talk about various things some of them being, the fall of empires to the gain of countries. I will talk about the most significant factor which triggered the First World War and the way some countries influenced others, encouraging them to become independent. 1832 was when Greece won its independence from the Ottoman Empire, this impacted the Ottoman Empire in many ways, for example Serbia and Bulgaria now wanted their independence due to Greece and eventually they achieved this. Ever since Serbia had gained its independence from the Ottoman Empire in 1878, it became a huge problem for Austria-Hungary, as the 6 million Serbs, who were located in the south of Austria-Hungary wanted to reunite with Serbia. Austria-Hungary came to a conclusion in which they decided that they would try to conquer Serbia, in order to stop this threat, as failure to do so would mean that the Serbs broke out and demands of others (Czech and Croats) ...read more.

In 1911 the Turks fell from power in Turkey, many countries including its enemies (Siberia and Russia) saw this as an opportunity to attack the Ottomans. The Balkan league was formed, this consisted of 4 countries Russia, Siberia, Montenegro, Bulgaria. All these countries went to war against the Ottomans and in 1912 declared war. Within 3 weeks the Balkan league had almost pushed the Ottomans out of Europe, the major decline in the Ottomans worried Austria-Hungary who feared nationalism would rise again and unsettle its people. The Hapsburgs' were successful in convincing the great powers to sign a peace treaty. This brang the first Balkan war to an end. This peace treaty did not last long as the war started again, however it was not similar to the first one where Balkan countries all united in order to take the Ottomans land. This war was about what each of the Balkan league had won in the previous war. Bulgaria attacked its former allies as it was unhappy about its gains. Romania joined in the war to take land from Bulgaria and even the Ottomans were able to win back some of their previous land which had been lost in the war. ...read more.

In conclusion I Believe the First World War had to happen; tension between these countries was growing day by day. It was inevitable; however I do believe that the World war should have gone on without Britain as they had no reason to join in, if anything they should have gone against Russia as they were the ones to ruin their and France's trade, when they became part of the Balkans, although I do believe Britain got involved for a better reason, than a deal which they made over a century ago and was as important as a 'scrap of paper'. The two main countries which I believe caused the First World War were Russia and Serbia. They tried to go against Austria-Hungary every chance they got. Both were pro-nationalist, thus automatically Austria-Hungary was there main opponent (after the breaking of the Ottoman Empire). The main short term cause which triggered the First World War was the killing of Franz Ferdinand, as I believe the Hasburg family must have been furious and Serbia and Russia must have expected the Hapsburgs' to retaliate in such a way after the rejection of the ultimatum ?? ?? ?? ?? ...read more.