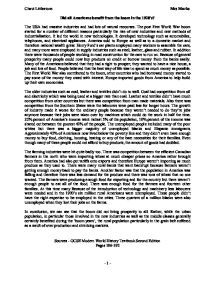 Did all Americans benefit from the boom in the 1920's

Did all Americans benefit from the boom in the 1920’s?

The USA had massive industries and had lots of natural recourses. The post First World War boom started for a number of different reasons particularly the rise of new industries and new methods of industrialisation. It led the world in new technologies. It developed technology such as automobiles, telephones, and electrical appliances. America sold to Europe as well as to a domestic market and therefore national wealth grew. Henry Ford’s car plants employed many workers to assemble the cars, and many more were employed in supply industries such as steel, leather, glass and rubber. In addition there were thousands of people working in road construction for the cars to run on. Because of general prosperity many people could now buy products on credit or borrow money from the banks easily. Many of the Americans believed that they had a right to prosper; they wanted to have a nice house, a job and lots of food. People believed that the best way of life was to spend as much money as possible. The First World War also contributed to the boom, other countries who had borrowed money started to pay some of the money they owed with interest. Europe imported goods from America to help build up their own economies.

The older industries such as coal, leather and textiles didn’t do to well. Coal had competition from oil and electricity which was being used at a bigger rate than coal. Leather and textiles didn’t have much competition from other countries but there was competition from man made materials. Also there was competition from the Southern States were the labourers were paid less for longer hours. The growth of industry made it worse for the ordinary people because they weren’t needed to do they’re jobs anymore because their jobs were taken over by machines which could do the work in half the time. 32% percent of America’s income went richest 5% of the population, 10% percent of the income was shared out between the poorest 42% of the people. The unemployed people included many of the poor whites but there was a bigger majority of unemployed blacks and Hispanic immigrants. Approximately 42% of Americans now lived below the poverty line and they didn’t even have enough money to buy food, clothing, housing, heating or any of the bare necessities for their families. Even though many of these people could not afford to buy products, the amount of goods had doubled.

The farming industries were hit quite badly too. There was competition between the efficient Canadian farmers in the north who were importing wheat at much cheaper prices so America rather brought from them. America had also put tariffs onto exports and therefore Europe weren’t importing as much produce as they used to. There were many rural banks that went bankrupt because farmers weren’t getting enough money back to pay the banks. Another factor was that the population in America was falling and therefore there was less demand for the produce and there was tons of wheat that no one wanted. The farmers were producing enough food for exporting and for the country but there weren’t enough people to eat all of the food. There was enough food for the farmers and fourteen other families. At this time many Because of the introduction of technology and machinery less labourers were needed and in the 1920’s six million rural Americans were unemployed. These people didn’t have the right expertise to be employed in the cities. Three quarters of a million blacks were also unemployed when they lost their jobs on the farms.

In conclusion, we can see that the boom did not bring prosperity to all. Rather, while the urban population, in particular those involved in the new industries as well as the middle classes generally certainly benefited during the ‘boom years’, the rural population particularly in the grain belt suffered as a result of over production and shrinking markets.