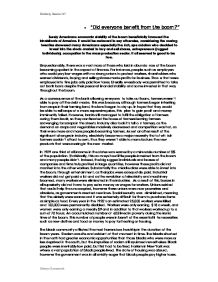 Did everyone benefit from the boom?

* "Did everyone benefit from the boom?" Surely Americans economic stability of the boom beneficially favoured the inhabitants of America. It would be awkward to say otherwise, considering the roaring twenties showered many Americans especially the rich, speculators who decided to invest into the stock-market to buy and sell shares, entrepreneurs (rugged individuals), occupation in the mass production sector. It all seemed to good to be true. Unquestionably, there was a vast mass of those who laid in abundance of the boom becoming opulent in the aspect of finance. For instance, people such as employers who could pay low wages with no strong unions to protect workers, shareholders who earned dividends, buying and selling shares made profits for business. Those that were employed into fine jobs only paid low taxes. Literally everybody was permitted to take out bank loans despite their personal financial stability and some invested in that way throughout the boom. As a consequence of the bank allowing everyone to take out loans, farmers weren't able to pay off the debt made. ...read more.

Indeed, the big rugged individuals and bosses of companies and firms truly profited in large quantities, however these profits did not manifest into the other workers. Substantially the middle class were able to invest into the boom, through entertainment, as their jobs were adequately paid. Industrial workers did not get paid a lot and as the revolution of electricity and machinery boomed, many workers were eliminated in the industries. As a result of this, bosses in all superiority did not have to pay extra money as wages for workers. Unions existed that could help the unoccupied, however these unions were now powerless and obsolete, as governments created new laws. Social security was diminished, meaning that the elderly were scarce and it was extremely difficult for them to purchase items as simple as food. Every year in the 1920's an estimated 25,000 workers were killed and 100,000 were permanently disabled. Workers were only earning $18 a week, and women were only earning a measly $9 and in addition to that workers worked up to a sum of 70 hours. ...read more.

Lynching is am assault that inhibits severe violence until death or being hung without legal authority. The infamous racist cult of The Klu Klux Klan used intimidation and violence against black people and those who oppressed their opinions by stating or believing that all races are equal. Most of the black people lived in the southern states and suffered from the same problems that farmers underwent too. Most black people were occupied as share croppers, therefore getting even lower profits than the white people who were already suffering. Although the boom emulated prosperity and wealth, there were a large number of American citizens who did not inflict on this. The entrepreneurs, business men, bosses of companies and firms reaped such riches as described. The minority of blacks, poor whites, farmers and industrial workers all were stripped from what they had without no one to console to. Especially the blacks, as the racial discrimination dominated America even judges and lawyers who are meant to support the welfare of all citizens. The boom did indeed prosper, for those who were rich however, the ordinary and the omen of lower class proved otherwise. ?? ?? ?? ?? Kimberly Ranola 11T History Coursework ...read more.