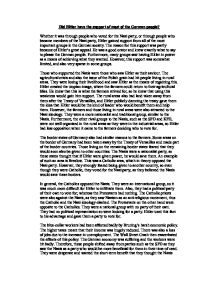 Did Hitler have the support of most of the German people?

Did Hitler have the support of most of the German people?

Whether it was through people who voted for the Nazi party, or through people who became members of the Nazi party, Hitler gained support from all of the most important groups in the German society. The reason for this support was partly because of Hitler’s great appeal. He was a good orator and knew exactly what to say to please the German people. Furthermore, many groups saw having Hitler in power as a means of achieving what they wanted. However, this support was somewhat limited, and also very sparse in some groups.

Those who supported the Nazis were those who saw Hitler as their saviour. The agricultural crisis and also the issue of the Polish grain had hit people living in rural areas. They were losing their livelihood and saw Hitler as the means of regaining this. Hitler created the utopian image, where the farmers could return to their agricultural bliss. He knew that this is what the farmers strived for, so he knew that using this weakness would gain him support. The rural areas also had land taken away from them after the Treaty of Versailles, and Hitler publicly damning the treaty gave them the idea that Hitler would be the kind of leader who would benefit them and help them. However, the farmers and those living in rural areas were also attracted to the Nazi ideology. They were a more nationalist and traditional group, similar to the Nazis. Furthermore, the other rival groups to the Nazis, such as the SPD and KPD, were not well organised in the rural areas as they were in the industrial areas, so Hitler had less opposition when it came to the farmers deciding who to vote for.

The border states of Germany also had similar reasons to the farmers. Some areas on the border of Germany had been taken away by the Treaty of Versailles and made part of the border countries. Those living on the remaining border states feared that they would soon also be given to other countries. The Nazis were a nationalist party, so these states thought that if Hitler were given power, he would save them. An example of such an area is Breslow. This was a Catholic area, which in theory opposed the Nazi party. However, they strongly feared being given to another country, so even though they were Catholic, they voted for the Nazi party, as they believed the Nazis would save these borders.

In general, the Catholics opposed the Nazis. They were an international group, so it was much more difficult for Hitler to infiltrate them. Also, they had a political party of their own to vote for; whereas the Protestants had nothing. The Catholic priests were also against the Nazis, as they saw Nazism as an anti-religious movement, thus the Catholic and the Nazi ideology clashed. The Protestants on the other hand were opposite to the Catholics. They were a national group with no party of their own. They had no political representation so were looking for a party. Hitler used this fact to his advantage and gave them a party to vote for.

The blue-collar workers had been affected badly by Bruning’s harsh economic policy. The higher taxes meant that their income was hugely reduced. There was also a loss of jobs due to the increase in unemployment. The Wall Street Crash then exacerbated the effects of this policy. The German economy was suffering and the workers were hit badly. Therefore, these people shifted away from parties such as the SPD as they saw the Nazis as a party who would be more beneficial for them in their time of need. They were desperate and wanted the short-term benefit that they thought the Nazis would give them, rather then the long-term stability the other parties may be able to give them. The extreme parties became more popular, however, the KPD were not effective, as they were not organised in the small towns. The blue-collar workers made up a large percentage of the population, and 30% of the Nazi votes came from this group.

Many groups joined the Nazis. The young were a target group for Hitler. They were easy to influence as they were more readily inspired and were adaptable. The young would accept the new ideas of Nazism, whereas the older generation were more set in their ways and were less ready to accept change. In addition, after the purge of the SA in 1934, many of the older members within the Nazi party were dismissed, which led the way for the new generation. However, the Nazi party also appealed to the younger generation. It was dynamic and offered many opportunities for a better Germany, which was very attractive to the young, but moreover, any German, in this time of depression. The young made up 34% of the Nazi party.

The middle class groups, including the owners of small businesses, the self-employed, and those who had invested into businesses, were also hit by the economic crisis. From 1928-1933, the demand for goods was falling because people could simply not afford to buy anything. This affected the small businesses and the self employed. And as their profits were rapidly decreasing, their investors were also losing out. Their pockets were being hit severely, and they saw the Nazis as the group to save them from this crisis. This is supported by the fact that in comparison to the percentage of middle class citizens in the population, there was a much higher proportion of them within the Nazi party.

The elite groups, such as the army, the nationalists and the Junkers also joined the Nazi party. With Hitler in power, they knew that re-armament would be a priority. This was something that appealed to both the army and the nationalists. Hitler would fight to regain Germany’s status, international recognition, and also Germany’s honour. The Junkers were also against Schleicher and were keen to end the Weimar Republic policies on land reform.

Hitler had an element of support across the spectrum of the most important groups, whether it was because they truly supported him, or whether it was for their own personal benefit. Their reasons were irrelevant; it was support that Hitler needed and it was much support that he received. His support may have been sparse in many areas and was also spread very thinly, but as he had support from each group, this was enough. Furthermore, unlike the other parties who focused solely on one group, Hitler had the advantage of appealing to many groups and gaining a hint of support from them all.