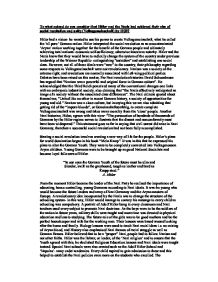 Did Hitler succeed in creating a Volksgemeinschaft?

To what extend do you consider that Hitler and the Nazis had achieved their aim of social revolution and unity (Volksgemeinschaft) by 1939? Hitler had a vision- he wanted to use his power to create Volksgemeinschaft, what he called the 'all pure' German nation. Hitler interpreted the social revolution as an uncontaminated 'Aryan' nation working together for the benefit of the German people and ultimately achieving total national economic self-sufficiency; otherwise known as autarky. Hitler and the Nazis knew that they would have to radically change the system of the country under previous leadership of the Weimar Republic- extinguishing "outsiders" and establishing one social class. However, not all of these ideals were "new" to the country, their philosophy regarding some respects to Volksgemeinschaft were not revolutionary. Nazism was a society of the extreme right, and revolutions are normally associated with left-wing political parties. Debates have been raised on this matter; Pro-Nazi revolution historian David Schoenbaum has argued that "Nazism was a powerful and original force in German culture". He acknowledged that the Third Reich perceived many of the conventional changes one links with an embryonic industrial society, also claiming that "the Nazis effectively anticipated an image of a society without the associated class differences". The Nazi citizens quoted about themselves, "United like no other in recent German history, a society of opportunities for young and old." Nazism was a close culture, but in saying this we are also admitting that getting rid of the "impure bloods", or Gemeinschaftsunfahig, to create complete Volksgemeinschaft was wrong and takes away morality from the 'close' people. Another Nazi historian, Hiden, agrees with this view- "The persecution of hundreds of thousands of Germans by the Hitler regime serves to illustrate that the dissent and nonconformity must have been widespread." This statement goes as far in saying that civil unrest did arise in Nazi Germany, therefore a successful social revolution had not been fully accomplished. Starting a social revolution involves creating a new way of life for the people. ...read more.

Hitler introduced Lebensborns which were buildings where women could go to become pregnant by a "racially pure" SS man. The government openly publicised them and the Nazis were prepared to go to these lengths in order to create the Aryan race. Also, because breeding a stock of Aryan people was essential in the eyes of the Fuhrer, legal divorces were made much easier to obtain. A marriage which was not producing children for the national community was seen as 'worthless'. This helped Hitler to create the personnel for his Volksgemeinschaft. To combat against women working, the Nazis issued restriction on women's employment in the Civil Service- in October 1933, the official guidelines for recruiting stated, "In the event of males and females being equally qualified for employment in public service, the male applicant should be given preference." This shows Hitler trying to achieve his aims, therefore partially achieving social revolution as women remained at home. Overall, the Nazi policies towards women suffered from several contradictions. Family life was promoted as an Aryan family would provide the base for Hitler's Volksgemeinschaft and propaganda was used to encourage this. However, several of the Nazi policies undermined the family and its ways of life. The demands of the Hitler Youth took women away from the family and the quest for the genetically pure race led to the encouragement of divorce. Also, the Lebensborn programmes encouraged promiscuity as in a way they were 'state-run brothels'. Another contradiction occurred when dealing with the Nazis attempt to drive women back into the home. The number of women in all employment areas increased, mainly due to the economic recovery. By 1936, the economy was suffering from a labour shortage in key areas and, by 1939, this had become acute. In 1943 Hitler had to reside to the fact that women had to register to work in order for the country to carry on functioning due to the war. ...read more.

The racial policies were very much enforced, with Jews, Blacks and Gypsies all being sent to concentration camps. Similarly, the same went for those who did not support the party. Additionally, the euthanasia projects of the late 1930s 'assisted' those who were not able-bodied, leaving the country 'pure'. Changes like this to society point directly to a social revolution. Support for the party and leader increased with the introduction of the Nazi education system and the Hitler Youth. This group promoted the Nazi ways and discipline style to younger generations, and family values were promoted throughout Germany- another change to social life and behaviour. However there are areas which suggest that Hitler was not successful in his mission for Volksgemeinschaft. First and foremost, Hitler needed the elites- big businesses, landowners, Junkers the Church and the army. Without these elements supporting the Party, Hitler would lose massive amounts of influence and control, and the fact that they still existed goes against the proposed classless society. Another point of Volksgemeinschaft was that Hitler would have complete control over the State, which he did not have. Due to Hitler's need to pursue foreign policy targets, this scheme was a failure. The war effort and attempts to obtain autarky led to many changes to an already disturbed society. Also, it would be impossible for Hitler to exterminate everybody that did not match his Volksgemeinschaft criteria, as they were imperative to the war effort. In contrast to the nationalistic point of Aryan workers was the fact that foreign workers were readily used on farms all the able men were conscripted to the army. This contradicts the traditional way of life Hitler had promised for Volksgemeinschaft. Also, due to the preparation for the war, women were needed in the factories- once again opposing the traditional lifestyle Hitler wanted for women. As Ian Kershaw explains, the Nazi regime was "a physiological 'revolution' rather than one of substance". Minds had to be won over before a 'full' social revolution could take place. ?? ?? ?? ?? ...read more.