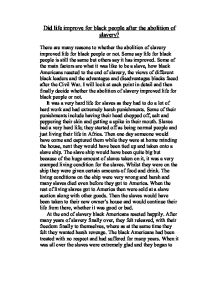 Did life improve for black people after the abolition of slavery?

Black soldiers got paid $7 and white soldiers got paid $13, the black soldiers were 10% of the union army. Another 200,000 people served as labourers, cooks and nurses. After the Civil War 17 black soldiers and 4 black sailors were awarded the congressional medal of honour. During the Civil War lots of black people contributed because they wanted to be free. The disadvantages blacks faced after the Civil War were that half the US prison population is black, one in twelve of the total population is black. 67% of black families earn less than the USA's average family income. White family income: $39,000. Black family income: $21,550. 38 of the top 50 companies in America have no black people on their board of directors. The advantages blacks faced after the Civil War were that blacks were treated much better. In 1984 only 20% of students in southern states attended segregated schools. Blacks are a minority of drug users but a majority of those sentenced for drug offences. ...read more.