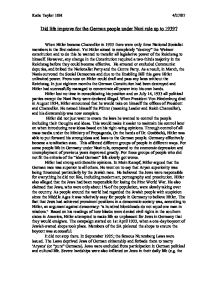 Did life improve for the German people under Nazi rule up to 1939?

Did life improve for the German people under Nazi rule up to 1939? When Hitler became Chancellor in 1933 there were only three National Socialist members in the first cabinet. Yet Hitler aimed to completely "destroy" the Weimer constitution and to do this he wanted to transfer all legislative power of the Reichstag to himself. However, any change in the Constitution required a two-thirds majority in the Reichstag before they could become effective. He arrested or excluded Communist deputies, and bribed the Nationalist Party and the Centre Party. As a result, in March, the Nazis outvoted the Social Democrats and due to the Enabling Bill this gave Hitler unlimited power. From now on Hitler could draft and pass any laws without the Reichstag. In just eighteen months the German Constitution had been destroyed and Hitler had successfully managed to concentrate all power into his own hands. Hitler lost no time in consolidating his position and on July 14, 1933 all political parties except the Nazi Party were declared illegal. When President Von Hindenburg died in August 1934, Hitler announced that he would take on himself the offices of President and Chancellor. He named himself the F�hrer (meaning Leader and Reich Chancellor), and his dictatorship was now complete. ...read more.

Life for the Jewish people in Germany definitely worsened. There was a huge amount of pressure placed on them to leave everything behind and emigrate, as well as large numbers losing their jobs. Many were placed in concentration camps, destined to die. As Hitler was an atheist he disliked other religions. In fact he wanted the German people to worship him and many of them did. They hailed him as the "new Messiah" who had pulled Germany out of her economic turmoil. For those who did not believe that Hitler was the "returned Messiah" such as the Jehovah Witnesses, concentration camps awaited them. In terms of other religions mainly, Protestants and Catholics, Hitler was willing to tolerate them, at least at first. He still wanted to bring both the Catholic Church and the Protestant Church under his control. Hitler signed a Concordat with the Vatican in which the Catholic Church recognized the new regime and renounced all activity except that of a purely religious kind in Germany. In return, Hitler guaranteed the Catholic Church many of its historic rights, including the right to conduct local schools. Very soon, Hitler broke his promise. In 1937, resenting the Nazi interference with the Catholic control of education and the youth movement, the Pope issued the encyclical known as "With Burning Sorrow" condemning the Nazi policy of state and racial superiority. ...read more.

The following year another one was opened in Ravensbruck. Though life certainly did not improve for many groups of people perhaps it improved for others. Unemployment certainly did fall, and by 1939 there were less than one million unemployed. For the middle class life was no longer insecure or worrying. It is evident that Hitler crushed the threat of communism in his own rise to power. Their finances and property were once again secure. Previously unemployed men had jobs and could bring money home to their families; they could afford clothes and food. Germany was once again thriving and full of industrial growth. It is clear that for the societal norm living conditions improved. Many were convinced that Hitler was their one true leader "who only cared about the German people". He created jobs and public works schemes; Germany was no longer suffering from depression after the Wall Street Crash and was pulled out of its economic slump. However Hitler was a dictator and was therefore only likely to come to power in times of great hardship. He had strong opinions and views. Though he certainly did put "some things right", it came at a price and in the end it wasn't enough. People did not know how much death and destruction he would eventually cause and the bad certainly outweighed the good. ...read more.