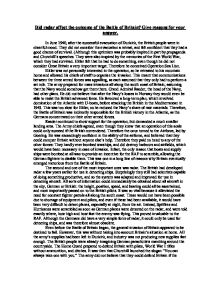 Did radar affect the outcome of the Battle of Britain?

Did radar affect the outcome of the Battle of Britain? Give reasons for your answer. In June 1940, after the successful evacuation of Dunkirk, the British people were in cheerful mood. They did not consider the evacuation a retreat, and felt confident that they had a good chance of survival. (Although this optimism was probably inspired in part by propaganda and Churchill's speeches. They were also inspired by the memories of the First World War, which they had survived. Hitler felt that he had to do something, even though he did not consider Great Britain a very important target. Therefore he conceived Operation Sea Lion. Hitler was not personally interested in the operation, so he retreated to his mountain home and allowed his chiefs of staff to organise the invasion. This meant that communications between the three armed forces was appalling, as each assumed that they only had to perform a set role. The army prepared for mass invasions all along the south coast of Britain, assuming that the Navy would somehow get them there. Grand Admiral Raeder, the head of the Navy, had other plans. He did not believe that after the Navy's losses in Norway they would even be able to resist the British advanced force. He favoured a long-term plan, which involved domination of the Atlantic with U-boats, before attacking the British in the Mediterranean in 1943. ...read more.

Fortunately the Royal Air Force was still intact, and prepared to defend the country. On paper the Luftwaffe were far stronger than the RAF, although these figures were largely misleading. In fighter aircraft the two were reasonably equal, and it was only in bombers that the Germans had a huge advantage. As the British were not going to do any bombing anyway, this did not matter, especially as the German bombers needed fighter escorts. Britain actually increased her number of fighters during the Battle, and it was only the shortage of pilots that was a problem. Another problem for the Germans was that the fighters were operating at the very edge of their range, and could only stay above London for ten minutes. After that the bombers were left unguarded. Infact, it seems that the only advantage that the Luftwaffe possessed was that their pilots were far more experienced than the British. The Germans had already had experience over France, and earlier in the war over Scandinavia. The British had had no experience at all, and were mostly new, young recruits anyway. They had been enlisted in a hurry and did not always have the necessary training. This problem was compounded during the battle, when the British lost large numbers of pilots. ...read more.

Fortunately this was a false alarm, and the Germans suffered large losses at the hands of the RAF. They bombed again on September 9th, although with less affect, as only half of the German bombers reached their targets. On September 15th the Germans launched their final bombing raid. The RAF were prepared, and the Germans were shamed. They lost 60 aircraft, to the British losses of 26. The British morale was further boosted by the optimistic belief that they had destroyed 185. Even so, it was enough. Germany had failed to gain superiority of the air, and was forced, in November 1941, to abandon Operation Sea Lion. Although it was not realised at the time, the bombing of Berlin by the RAF, and then the much more serious bombing of London by the Luftwaffe, began the indiscriminate bombing of citizens and cities that continued throughout the war. The victory in the Battle of Britain completed what the Dunkirk evacuation had begun: it restored British spirits. It provided a base for the rest of the war, and denied Germany that early chance to gain a decisive victory. The reasons for this British success have been stated above, and obviously one of the most important of these was radar. However, radar on it's own did not win the war: it was the combination of radar, good equipment, German indecision, and British good luck that eventually secured victory, and it would seem foolish to attribute it to any one factor. ...read more.