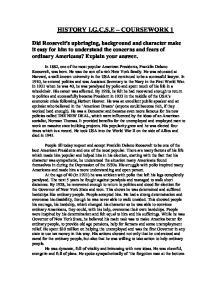 Did Roosevelt's upbringing, background and character make it easy for him to understand the concerns and fears of ordinary Americans? Explain your answer.

HISTORY I.G.C.S.E - COURSEWORK 1 Did Roosevelt's upbringing, background and character make it easy for him to understand the concerns and fears of ordinary Americans? Explain your answer. In 1882, one of the most popular American Presidents, Franklin Delano Roosevelt, was born. He was the son of a rich New York family. He was educated at Harvard, a well-known university in the USA and continued to be a successful lawyer. In 1910, he entered politics and was Assistant Secretary to the Navy in the First World War. In 1921 when he was 40, he was paralysed by polio and spent much of his life in a wheelchair. His career was affected. By 1928, he felt he had recovered enough to return to politics and successfully became President in 1933 in the middle of the USA's economic crisis following Herbert Hoover. He was an excellent public speaker and an optimist who believed in the 'American Dream' (anyone could become rich, if they worked hard enough). He was a Democrat and became even more famous for his new policies called THE NEW DEAL, which were influenced by the ideas of an American socialist, Norman Thomas. It provided benefits for the unemployed and employed men to work on massive state building projects. His popularity grew and he was elected four times which is a record. He took USA into the World War II on the side of Allies and died in 1945. People till today respect and accept Franklin Delano Roosevelt to be one of the best American Presidents and one of the most popular. There are many factors of his life which made him popular and helped him in his election, starting with the fact that his character was sympathetic, he understood the situation many Americans found themselves in during the Depression of the 1930s. His struggle with polio inspired many Americans and made him a more understanding and open person. ...read more.

He set up the Temporary Emergency Relief Administration in 1932, which was given $20 million and financed from an increase in income tax, for work relief during winter 1931. New York became the first state to run relief effort in the nation. This showed people he had ideas and plans and was able to implement them correctly. Roosevelt was a great speaker and his speeches inspired people. He made about 15 to 20 speeches a day during the election. His election organizer, Jim Farley said that Roosevelt was "able to give the impression that he enjoyed meeting people". Raymond Moley, a writer stated that "he had the 'common touch' and convinced people that he wanted to protect the Weak against the Strong". He brought new hope when he said in his inauguration speech, "Let me assert my firm belief that the only thing we have to fear, is fear itself". Roosevelt loved politics and was a natural campaigner. He was cheerful, optimistic, and a good communicator. He sees no end to the boundaries and believed in what he could achieve. He once said, " Every man has a right to life and this means that he has a right to earn a comfortable living. Every man has a right to own property, which means a right to be sure that his savings are safe". Other inspirational words from him were, " If you treat people right, they will treat you right". There were also many positive comments by people about him. Beacroft, a historian, stated in his report that one of the people said, " Roosevelt is the only President who ever cared for people like us". Frances Perkins, a member of Roosevelt's cabinet strongly stated that 'There was a bond between Roosevelt and ordinary men and women of this country - and beyond that, between him and the ordinary men and women of the world'. ...read more.

The common people couldn't afford to have a summer home. As a young child, he was taught by a governess and was taken on frequent trips to Europe. The family estate was a 188-acre site. Ordinary people couldn't afford any of these luxuries and very few were given the opportunity to go abroad. Having an estate so large when ordinary people suffered to have one made them feel against him. It could be argued that this upbringing background of privilege, wealth was a huge barrier in him understanding ordinary American lives, particularly those suffering the worse economic hardships. When Roosevelt first entered politics in 1910, not everyone was impressed. He seemed to be a serious man and other members of the New York State Senate avoided him. He had a love for simple joys like stamp collecting. Frances Perkins, a member of Roosevelt's cabinet told about his early memories of Roosevelt in the 1910s that Roosevelt was not particularly charming. He rarely smiled and had an unfortunate habit of throwing his head up. This, combined with his great height, gave him the appearance of looking down his nose at most people. Therefore, not only did his wealthy background held him back when trying to understand ordinary Americans, so did his superior personality and character up to 1928. On the morning of April 12, 1945, the respected Franklin Delano Roosevelt died and was buried in Hyde Park. He was the most popular of all American Presidents and was President from 1933 till 1945. He was elected four times making it a record. From the various facts stated above about his life shows he was controversial, having both positive and negative points. His energy, optimism and dynamism made him popular. He had suffered like ordinary people (polio in 1921) and understood them. He overcame his severe disability to become President and his care for people make him one of the greatest liberal Presidents, believing that power of government should be used to create a fairer society. He was, 'the Greatest American President who had a strong loving bond between him and his people' (Frances Perkins). ...read more.