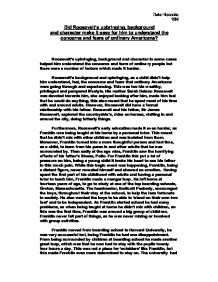 Did Roosevelt's upbringing, background and character make it easy for him to understand the concerns and fears of ordinary Americans?

Did Roosevelt's upbringing, background and character make it easy for him to understand the concerns and fears of ordinary Americans? Roosevelt's upbringing, background and character in some cases helped him understand the concerns and fears of ordinary people but there were a number of factors which made it harder. Roosevelt's background and upbringing, as a child didn't help him understand, feel, the concerns and fears that ordinary Americans were going through and experiencing. This was too his wealthy, privileged and pampered lifestyle. His mother Sarah Delano Roosevelt was devoted towards him, she enjoyed looking after him, made him feel that he could do anything, this also meant that he spent most of his time with and around adults. However, Roosevelt did have a formal relationship with his father. Roosevelt and his father, Mr James Roosevelt, explored the countryside's, rides on horses, visiting in and around the city, doing fatherly things. Furthermore, Roosevelt's early education made it even harder, as Franklin was being taught at his home by a personal tutor. This meant that he didn't mix with other children and was isolated from them. ...read more.

He started to sleep walk, was 'high' and Eleanor wanted a close interment relationship but Franklin wasn't having any of it. As Franklin changed and became an adult and had finished school and all the qualifications, an ex-president had a big influence on him. This helped Franklin to understand the concerns and fears of ordinary Americans. The ex-president, Theodore Roosevelt was very popular with the public and well thought of, he was a distant cousin of Franklin's. During the First World War he went overseas and visited two battlefields, he talked to soldiers and other people out there. He returned and was then nominated for vice president. His campaign opened a window to get out and talk to the ordinary people of America. However, Franklin followed in the footsteps of his distant cousin, and in 1910 Franklin was elected as a Democrat Senator of New York. Franklin wasn't given the right to be a Republican for many reasons. Franklin led an upstate group against the corrupt Democrats chiefs who operated from their headquarters, ''Tammany Hall'' in New York. They thought Franklin was a snob, unwilling, rich, spoiled and stated a quote, 'drown him before he grows up'. ...read more.

He set off and started to relax and go swimming in the river and do a bit of fishing. Also he was there to exercise and to release the trapped energy inside of him. To get over the body that used to be his but took longer than imagined. Like Theodore Roosevelt, Franklin wanted to reform. Republicans turned down his ideas for shorter working days, compensation for work injuries and help for the sick, old and farmers. After the 'Crash' he started the 'Temporary Emergency Relief Administration' and Franklin formed expert committees to plan aid for the unemployment. Re-elected in 1930 with an increase majority and in 1932 had impressed voters so much that he became President. There were many bad things in his life that should have stopped him from moving forward, but he used it for the better and he learnt fro m his mistakes. The main turning point in his life was the Polio attack and by opening the Warm Springs clinic for the sick it helped him to build his confidence. Also the many people that influenced him in his life also help him in a big way to understand the concerns and fears of the ordinary Americans. Dale Hiscocks 10M ...read more.