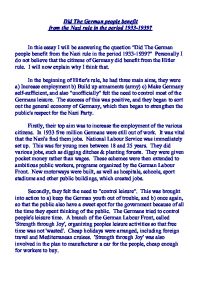 Did The German people benefit from the Nazi rule in the period 1933-1939? In this essay I will be answering the question "Did The German people benefit from the Nazi rule in the period 1933-1939?" Personally I do not believe that the citizens of Germany did benefit from the Hitler rule. I will now explain why I think that. In the beginning of Hitler's rule, he had three main aims, they were a) Increase employment b) Build up armaments (army) c) Make Germany self-sufficient, and also "unofficially" felt the need to control most of the Germans leisure. The success of this was positive, and they began to sort out the general economy of Germany, which then began to strengthen the public's respect for the Nazi Party. Firstly, their top aim was to increase the employment of the various citizens. In 1933 five million Germans were still out of work. It was vital that the Nazi's find them jobs. National Labour Service was immediately set up. ...read more.

Finally, a large area for development was Rearmament. Another of Hitler's priorities after seizing power was to build up Germany's armed forces. This had a big impact on the unemployment figures. From 1935 onwards, all 18-to-25 year olds had to do military service for two year. The armed forces thus grew from 100,000 in 1933 to 1,400,000 in 1939, cutting over a million from the unemployment registers. In 1934, a year after seizing power, Hitler ordered an increase in the armed forces. The army was to grow from 100,000 to 300,000 men. The navy was to build submarines and two battleships. An air force was to be created. This was forbidden by the Treaty of Versailles. If the Allies found out what was happening, there was a risk that they would invade Germany to stop it. So the armed forces expanded in secret. Air force pilots trained secretly in flying clubs. Bombers were disguised as airliners. In 1935 Hitler felt strong enough to start rearming openly. ...read more.

Church schools were shut down. The Catholic Youth League was broken up. Many monasteries were closed. The Pope protested in 1937 by issuing an encyclical. This was a letter to be read out in all Catholic churches in Germany. It condemned the Nazi's for being 'hostile to Christ and his Church'. But it had no effect. The Nazis not only continued to attack the Church but also started to arrest priests and put them into concentration camps. Finally, the Nazis did not give anyone the choice to vote for a different political party, which meant that there was no immediate way to get rid of the Nazi party, and, in some eyes, especially Hitler. After looking at the above information, I have to say I believe that the German public had to go through an intense period under the ruling of Hitler and feel there did not have it easy. As a summery I don't think the Germans had a good period under the Nazi rule. There may have been a lot of privileges, but there were larger and much more serious negative sides to the time between 1933-1939, and I have respect for anyone who survived this ordeal! ...read more.