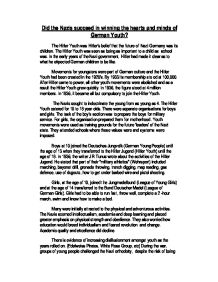 Did the Nazis succeed in winning the hearts and minds of German Youth?

Did the Nazis succeed in winning the hearts and minds of German Youth? The Hitler Youth was Hitler's belief that the future of Nazi Germany was its children. The Hitler Youth was seen as being as important to a child as school was. In the early years of the Nazi government, Hitler had made it clear as to what he expected German children to be like. Movements for youngsters were part of German culture and the Hitler Youth had been created in the 1920's. By 1933 its membership stood at 100,000. After Hitler came to power, all other youth movements were abolished and as a result the Hitler Youth grew quickly. In 1936, the figure stood at 4 million members. ...read more.

Boys at 10 joined the Deutsches Jungvolk (German Young People) until the age of 13 when they transferred to the Hitler Jugend (Hitler Youth) until the age of 18. In 1936, the writer J R Tunus wrote about the activities of the Hitler Jugend. He stated that part of their "military athletics" (Wehrsport) included marching, bayonet drill, grenade throwing, trench digging, map reading, gas defence, use of dugouts, how to get under barbed wire and pistol shooting. Girls, at the age of 10, joined the Jungmadelbund (League of Young Girls) and at the age of 14 transferred to the Bund Deutscher Madel (League of German Girls). Girls had to be able to run fast, throw well, complete a 2-hour march, swim and know how to make a bed. ...read more.

Many parents disliked the Nazi training but felt it was safer to appear as conformers than to objects. It could affect their child's education and friendships and their own position and status in the community. To the outside world, the Hitler Youth seemed to personify German discipline. But by 1938, attendance at Hitler Youth meetings was so poor - barely 25% - that the authorities decided to tighten up attendance with the 1939 law making attendance compulsory. Again shows that the Nazis could not fully capture the hearts of the Youth. Parents and children passively resisted the ideas although they did not agree. There was also a lot of evidence that there was disillusion with Youth movements over the years such as the drop in members. Many were initially interested in the adventurous activities, but it soon wore off. The Nazi propaganda showed the Youth movements to be doing better and more than what they really did. ...read more.