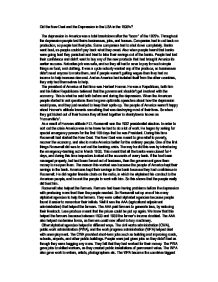 Did the New Deal end the Depression in the USA in the 1930's?

Did the New Deal end the Depression in the USA in the 1930's? The depression in America was a total breakdown after the "boom" of the 1920's. Throughout the depression people lost theirs businesses, jobs, and houses. Companies had to cut back on production, so people lost their jobs. Some companies had to shut down completely. Banks went bust, as people couldn't pay back what they owed. Also when people heard that banks were going bust they panicked and tried to take their savings out of the banks. People had lost their confidence and didn't want to buy any of the new products that had brought America its earlier success. Nobodies job was safe, and so they all had to save to pay for such simple things as food, and clothing. It was a cycle nobody wanted any of the produce, so businesses didn't need anyone to make them, and if people weren't getting wages then they had no income to help increase demand. And as America had isolated itself from the other countries, they only had themselves to help. The president of America at that time was Herbert Hoover. ...read more.

The CWA provided short-term jobs such as building and improving roads, schools, airports, and other public buildings. People were just given jobs so they didn't feel as though they were begging any more. They felt that they had worked for their money. The PWA gave jobs to skilled workers, as they created public installations of permanent value. The WPA also gave work to writers, artists, photographers etc. The WPA became the countries biggest employer, as it employed 2 million ever year. Roosevelt knew that as more people were getting any jobs they had money to buy food, clothes and even luxury goods. That it would increase the demand for goods again, making even more jobs in factories. The people working for the factories then got wages so they to could buy the goods, and so the economy would start up again. Roosevelt got the government to pay people's wages started the economy again, this system is called pump priming. The NRA (national recovery administration) was set up for three main reasons. *To increase workers wages so they would earn more money to spend on goods. ...read more.

Black people still found it hard to get a job, and although the black people were receiving more benefits then they ever had before. Also in the PWA most of the jobs were for skilled workers, so unskilled workers had to do the temporary jobs. But the Native Americans were giving money to buy land and equipment, and through the Indian re-organisation act they were also given their own rights, and were encouraged to follow their own culture and religions. With the New Deal Roosevelt achieved a lot, and however many critics he had what he did was impressive and unforgettable. He did reduce unemployment numbers dramatically with alphabet agencies, he started the economy working again, he gave people back their confidence with his fireside chats and his effort, put an end to prohibition making more jobs, and happier Americans. He gave the homeless homes again; he solved the banking crisis, and reformed trade unions. But it wasn't Roosevelt and the New Deal that totally solved the unemployment, as it was still 6 million in 1941. It was when America entered the World War 2 that the unemployment numbers came down to 2 million. So it was between Roosevelt's efforts and entering the World War 2 that America put an end to the depression. ...read more.