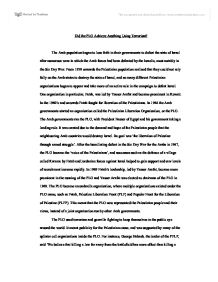 Did the PLO achieve anything using terrorism

Did the PLO Achieve Anything Using Terrorism? The Arab population began to lose faith in their governments to defeat the state of Israel after numerous wars in which the Arab forces had been defeated by the Israelis, most notably in the Six Day War. From 1959 onwards the Palestinian population realised that they could not rely fully on the Arab states to destroy the state of Israel, and so many different Palestinian organisations began to appear and take more of an active role in the campaign to defeat Israel. One organisation in particular, Fatah, was led by Yasser Arafat and became prominent in Kuwait. In the 1960's and onwards Fatah fought for liberation of the Palestinians. In 1964 the Arab governments started an organisation called the Palestinian Liberation Organisation, or the PLO. The Arab governments ran the PLO, with President Nasser of Egypt and his government taking a leading role. It was created due to the demand and hope of the Palestinian people that the neighbouring Arab countries would destroy Israel. ...read more.

At the 1972 Olympic Games in Munich, Black September, a group in the PLO, held 11 Israeli athletes hostage, eventually leading to the death of the 11 hostages. 'Black September' was named after the event in which the PLO were forced out of Jordan by King Hussein. The terrorists were killed at the airport in Munich by German police forces in a gun battle, but the mission was a huge success for the PLO anyway, due to the huge amounts of publicity that had been gained. This publicity was due to the attack taking place at such a high-profile event, but also because it contrasted with the peaceful meaning behind the Olympic Games, that countries can unite as one. In 1972 Japanese supporters of the PFLP killed 26 Israeli civilians at Lod airport in Israel. This shows that the support for the PLO was widespread, and stretched across the whole world. In 1976, the PFLP hijacked a French plane full of Israeli passengers. ...read more.

King Hussein didn't like the methods that the PLO were using, and thought that the PLO had become too powerful and so fighting broke out between the PLO and Jordanians where 10,000 Palestinians were killed. By using terrorism while being based in Jordan, the PLO lost both the support of a powerful ally and also a 'base' that was situated perfectly for the needs of the PLO. This was a huge setback for the PLO. Israel refused to negotiate with the PLO whilst the PLO were still using terrorism, and so this meant that terrorism was achieving opposite to what it was meant to- it was actually postponing talks with Israel. In conclusion the PLO did achieve publicity and recognition by using terrorism, and allowed the Palestinians a place in world politics through the UN. However, terrorism also created a negative view of the PLO, and some countries that had supported the PLO before the terrorism were shocked and disappointed by the actions of the PLO. The goal of the PLO to have an independent Palestinian State was not achieved by using terrorism. ?? ?? ?? ?? ...read more.