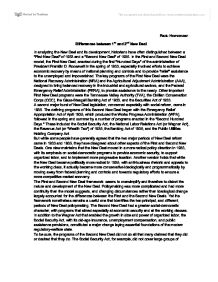 Radu Homorozan Differences between 1st and 2nd New Deal In analyzing the New Deal and its development, historians have often distinguished between a "First New Deal" of 1933 and a "Second New Deal" of 1935. In the First and Second New Deal model, the First New Deal, enacted during the first "Hundred Days" of the administration of President Franklin D. Roosevelt in the spring of 1933, especially involved efforts to achieve economic recovery by means of national planning and controls and to provide "relief" assistance to the unemployed and impoverished. The key programs of the First New Deal were the National Recovery Administration (NRA) and the Agricultural Adjustment Administration (AAA), designed to bring balanced recovery in the industrial and agricultural sectors, and the Federal Emergency Relief Administration (FERA), to provide assistance to the needy. ...read more.

One view maintains that the New Deal moved in a more radical policy direction in 1935, with its emphasis on social-democratic programs to provide economic security, to support organized labor, and to implement more progressive taxation. Another version holds that while the New Deal became politically more radical in 1935, with anti-business rhetoric and appeals to the working class, it actually became more conservative ideologically and programmatically by moving away from federal planning and controls and towards regulatory efforts to ensure a more competitive market economy. The First and Second New Deal framework seems to oversimplify and therefore to distort the nature and development of the New Deal. Policymaking was more complicated and had more continuity than the model suggests, and changing circumstances rather than ideological change largely accounted for the differences between the First and the Second New Deals. ...read more.

Surviving spouses initially had no benefits, and African Americans often held jobs not covered by the act. Benefits were relatively small, and the old-age and unemployment insurance were financed largely by regressive payroll taxes. The act did not include health insurance. In the reworking of social reform policy in 1935, "unemployables" (including such groups as children, the elderly, and the blind) fell to state responsibility, though the Social Security Act provided for matching grants for such categories of the needy. Other Second New Deal programs also had important limits. The "Wealth Tax" turned out to be something of a misnomer, for after Congress revised it, the legislation had little redistributionist character and did little to reduce concentrations of corporate wealth and power. The Public Utilities Holding Company Act also underwent significant revision, though ultimately it did help to decentralize the utilities industry and end some of the worst monopolistic practices. ...read more.