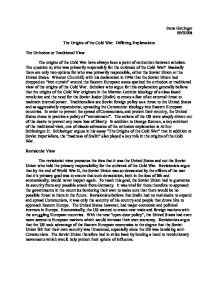 Differing Viewpoints on the Origins of the Cold War

Schlesinger argues in his essay "The Origins of the Cold War" that in addition to Soviet imperialism, the "madness of Stalin" also played a key role in the origins of the Cold War. Revisionist View The revisionist view promotes the idea that it was the United States and not the Soviet Union who held the primary responsibility for the outbreak of the Cold War. Revisionists argue that by the end of World War II, the Soviet Union was so devastated by the effects of the war that it's primary goal was to ensure that such devastation, both in the loss of life and economically, would never happen again. ...read more.

The Soviet Union therefore had to strike back by lending a hand to revolutionary movements which would help protect their sphere of influence. Post-Revisionist View Post-Revisionists believe that the issue of the origins of the Cold War is too complicated for a simple black and white answer about who is responsible. Neither of the explanations above, the Orthodox or the Revisionist explanation is sufficient to encompass all aspects of the issue. At the time neither explanation was backed up by any real proof because Soviet documents had not been released. It was the Post-Revisionist opinion then that neither side should be "blamed" and that once the documents were released that it was necessary to study the documents without a preconceived bias. ...read more.