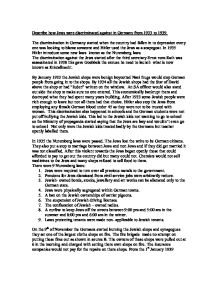 Discribe how jews were discriminiated aginst in germany

Describe how Jews were discriminated against in Germany from 1933 to 1939.

The discrimination in Germany started when the country had fallen in to depression every one was looking to blame someone and Hitler used the Jews as a scapegoat. In 1935 Hitler introduce some new laws  known as the Nuremberg laws.

The discrimination against the Jews started after the third secretary Ernst vom Rath was assassinated in 1938 this gave Goebbels the excuse he need to launch  what is now known as Kristallnacht.

By January 1933 the Jewish shops were benign boycotted Nazi thugs would stop German people from going in to the shops. By 1934 all the Jewish shops had the Star of David above the shop or had “Juden” written on the window.  An SA officer would also stand out side the shop to make sure no one entered. This economically bankrupt them and destroyed what they had spent many years building. After 1933 some Jewish people were rich enough to leave but not all them had that choice. Hitler also stop the Jews from employing any female German blood under 45 as they were not to be trusted with women.  This discrimination also happened in schools and the German students were not put off bullying the Jewish kids. This led to the Jewish kids not wanting to go to school so the Ministry of propaganda started saying that the Jews are lazy and wouldn’t even go to school.  Not only were the Jewish kids treated badly by the Germans but teacher openly labelled them.

In 1935 the Nuremberg laws were passed. The Jews lost the write to be German citizens. They also put a stop to marriage between Jews and non Jews and if they did get married it was not classified. After this violent towards the Jews began openly those that could afforded to pay to get out the country did but many could not. Chemists would not sell medicines to the Jews and many shops refused to sell food to them.

There were 9 Nuremberg laws:

On the 9th of November the Germans started burning the Jewish shops and synagogues they set one of the largest cloths shops on fire. The fire brigade  made no attempt on putting these fires out as shown in source B. The owners of these shops were pulled out at 6 in the morning and charged with setting there own shops on fire. The insurance companies would not pay for the repairs on there shops. From the 1st January 1939 Jewish people were no longer allowed to be business men and if any Jews were leading employees in business they had a six months noticed before they were dismissed.

Kristallnacht happened after Rath was assassinated this gave Goebbels the excuse he needed to launch Kristallnacht. Looking at source C in a report Goebbels gave he commented that even thought they did not start Kristallnacht they were not to discourage or put a stop to it.

The Germans from 1933-1939 really did discriminate against the Jews, and they done there best to get as many of them as they could to leave Germany. The Jews were not allowed to any think they even had designated areas they were allowed to go. By about the 1935s the Germans  became very violent towards the Jews.