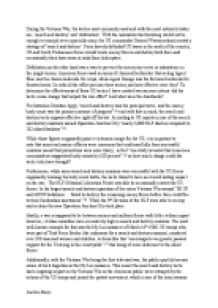 ﻿During the Vietnam War, the tactics most commonly used and with the most notoriety today are, ?search and destroy? and ?defoliation?. With the realization that bombing would not be enough to triumph over a guerrilla army, the US commander General Westmoreland created a strategy of ?search and destroy?. From heavily defended US bases in the south of the country, US and South Vietnamese forces would locate enemy forces and destroy both them and occasionally their base areas in raids from helicopters. Defoliation on the other hand was a way to prevent the enemy any cover or subsistence in the jungle terrain. American forces used an array of chemical herbicides: fast-acting Agent Blue was the chosen herbicide for crops, while Agent Orange was the favoured herbicide for forested areas. So with all the effort put into these tactics just how effective were they? To determine the effectiveness of these US tactics I have created two success criteria: did the tactic cause change that helped the war effort? ...read more.

The most well-known example for this was the My Lai massacre of March 16th 1968. US troops who were part of Task Force Barker (the codename for a search and destroy mission), murdered over 350 unarmed women and children. Actions like this ?encouraged even greater peasant support for the Vietcong in the countryside? [5] this being of more detriment to the allied forces. Additionally, with the Vietnam War being the first televised war, the public quickly became aware of such tragedies as the My Lai massacre. This meant the search and destroy tactic had a negating impact on the Vietnam War as the American public were outraged by the actions of the US troops and joined the protest movement, which is one of the main reasons the US left Vietnam. This displays how the US tactic of search and destroy was ineffective as it suffered such a major drawback with innocent villages such as My Lai being mistaken for NLF strongholds and innocent villagers and civilians being massacred. ...read more.

This inhibited the effectiveness of the defoliation tactic, as the damage caused by the US was essentially a free propaganda and recruitment source in aid of the NLF. In conclusion, though the US were able to carry out successful search and destroy missions, the body count is questionable and in some instances the Vietcong where able to regroup and returned after the US had left captured areas abating the change produced by the tactic. The tactic also had severe drawbacks in that civilians were accidently and sometimes purposefully killed, leading the Vietnamese people to resent the allied forces and support the NLF and was therefore not greatly effective. On the other hand, defoliation was more effective as it hindered the NLF food and coverage in forested areas and brought around a greater level of change than the search and destroy tactic. However, it too suffered drawbacks in the effect it had on the civilians and the country of Vietnam, so the tactic was not as effective because of the damage it caused destroying the very people the tactic was supposed to be protecting. ...read more.