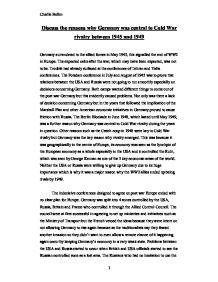 Discuss the reasons why Germany was central to Cold War rivalry between 1945 and 1949.

Discuss the reasons why Germany was central to Cold War rivalry between 1945 and 1949 Germany surrendered to the allied forces in May 1945, this signalled the end of WW2 in Europe. The expected calm after the war, which may have been expected, was not to be. Trouble had already surfaced at the conferences of Tehran and Yalta conferences. The Potsdam conference in July and August of 1945 was to prove that relations between the USA and Russia were not going to run smoothly especially on decisions concerning Germany. Both camps wanted different things to come out of the post war Germany but this evidently caused problems. Not only was there a lack of decision concerning Germany but in the years that followed the implication of the Marshall Plan and other American economic initiatives in Germany proved to cause friction with Russia. The Berlin Blockade in June 1948, which lasted until May 1949, was a further reason why Germany was central to Cold War rivalry during the years in question. Other reasons such as the Czech coup in 1948 were key to Cold War rivalry but Germany was the key reason why rivalry emerged. This was because it was geographically in the centre of Europe, its economy was seen as the lynchpin of the European economy as a whole especially in the USA and it controlled the Ruhr, which was seen by George Kennan as one of the 5 key economic areas of the world. Neither the USA or Russia were willing to give up Germany due to its huge importance which is why it was a major reason why the WW2 allies ended up being rivals by 1949. ...read more.

The Russians had earlier rejected currency reform at the Council of Foreign Ministers in London in 1947. However when the Deutchmark was launched on the 20th June 1948 they launched the East mark the following day. The traditionalists see this as a Russian initiative of trying to distance their zone from Bizonia in order to cement the communist power in the zone. The revisionist saw the launch of the currency as an attempt to undermine Soviet control of their zone; the launch of the East Mark was simply a way of countering the aggressive American economic policy. The post revisionist's claim that the camps introduced their currencies so the economies could prosper; they were separate currencies because of the lack of compliance between the 2 powers of currency reform not because they were trying to undermine each other. The launch of the currencies was however seen as an attempt to undermine control on both sides, which lead to Cold War rivalry. The Marshall plan also meant that West Germany was going to prosper. East Germany would not receive this aid because Moscow had refused to allow countries under its sphere of influence to accept it. This caused a problem for the Communists because the inhabitants of communist states would see them as having an inferior standard of living compared to the West. The revisionists claim that the Marshall Plan was implemented solely so the USA could try to spread capitalism. Traditionalists claim the Marshall Plan was implemented so Europe could prosper- hence why the aid was offered to Russia and the countries in her sphere of influence. ...read more.

Both sides did things, which were not in the interest of the other side. This was a reason why rivalry occurred. The traditionalists say that Russia was at fault because they were trying to push the Western allies out of Germany so they could use it as their base to launch their campaign to have pro Moscow communist governments all over Europe. The revisionists say that the economic plans of the USA were designed to try to push the communists out of all government whether they be an emerging party of an already established party. They also claim that the USA over reacted to the Berlin Blockade and were too aggressive by doing things such as placing their bombers in Britain. The post revisionists say that each side misunderstood the other wants and needs over Germany. Russia wanted it security needs to be met; the USA wanted it to be a trading partner. However both sides saw each other's actions as expansionist and aggressive. This was not what they were the misunderstandings caused the rivalry. The post revisionist claim that there was a misunderstanding between the camps is probably correct as they were not trying to push each other out of Germany but simply trying to make sure they kept control of their zone and they were both trying to achieve their own goals in their zone. These goals were different so rivalry over Germany was evidently going to occur from the day it was divided. If there had been no rivalry over Germany then the Cold War probably would not have been such a hostile atmosphere as it was. Germany was key to the Cold War rivalry between 1945 and 1949. Charlie Bellm 1 ...read more.