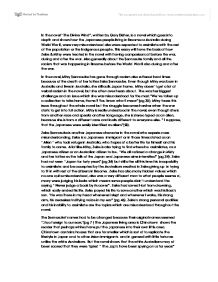 In the novel "The Divine Wind", written by Gary Disher, is a novel which goes into depth and shows how the Japanese people living in Broome or Australia during World War II, were very misunderstood also were expected to assimilate with the rest of the population or the Indigenous people. This essay will have the basis of how Zeke & Mitsy were treated in the novel with having comparisons of before the war, during and after the war. Also generally about the Sennosuke family and all the racism that was happening in Broome before the World War II also during and after the war. In the novel, Mitsy Sennosuke has gone through racism also suffered hard times because of the death of her father Zeke Sennosuke. Even though Mitsy was born in Australia and lives in Australia, she still calls Japan home. Mitsy doesn't get a lot of verbal racism in the novel, but she often over hears about. The was her biggest challenge and an issue which she was misunderstood for the most."We've taken up a collection to take home, Home? ...read more.

Zeke had not seen "Japan for forty years"(pg 34) but still after all this time his incapability to assimilate and be accepted by the Australians resulted in Zeke giving up in trying to fit in with rest of the citizens in Broome. Zeke has also many hidden values which no-one quite misunderstood, also was a very different man to what people seemed, many were judging his looks which means some people didn't understand the saying " Never judge a book by its cover". Zeke had saved Hart from drowning, which sadly ended his life. Zeke payed his life to save another which was his Boss's son. "He was there in my head whenever I slept and whenever I woke, His strong arm, his ceaseless fortifying voice in my ear"(pg 46). Zeke's strong personal qualities and his inability to assimilate are the topics which are misunderstood throughout the novel. The Sennosuke' names had to be changed because their original names seemed "?too foreign to our ears."(pg 7 ) ...read more.

This disguised that foreigners were seen as aliens and that they didn't really belong in Australia, because of their looks, it was different to what Australia were used to seeing, it was almost as they were from another country or world, therefore they were stereo typed as 'Aliens', also the Asian race, were mostly named as 'SEFS' in Australia which was a acronym for 'Squinty Eyed Freaks', which was regarding to their eyes, it was mean't to be an offensive saying like to Indigenous people were called ' Abos', Europeans were named as ' Wogs'. These names were giving the miss leading information of the foreigner's , making them as an enemy or someone who shouldn't belong in Australia. In conclusion, the times of the 40's and 50's it was a hard time for foreigner's trying to assimilate in Australia with the rest of the population because of their different ways and looks which lead to them being stereo typed, out casted, grouped and being verbally abused by the white Australians, which may of been as an act of defence. ** http://www.naa.gov.au/about-us/publications/fact-sheets/fs186.aspx @ from class study quotes ...read more.