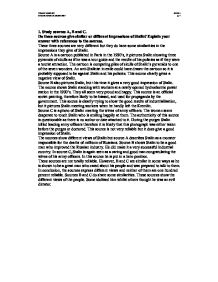 Do these sources give similar or different impressions of Stalin? Explain your answer with references to the sources.

1. Study sources A, B and C. Do these sources give similar or different impressions of Stalin? Explain your answer with references to the sources. These three sources are very different but they do have some similarities in the impressions they give of Stalin. Source A is a cartoon published in Paris in the 1930's, it pictures Stalin showing three pyramids of skulls as if he was a tour guide and the results of his policies as if they were a tourist attraction. The cartoon is comparing piles of skulls of Stalin's pyramids to one of the seven wonders. An anti-Stalinist in exile could have drawn the cartoon so it is probably supposed to be against Stalin and his policies. This source clearly gives a negative view of Stalin. Source B also pictures Stalin, but this time it gives a very good impression of Stalin. The source shows Stalin standing with workers at a newly opened hydroelectric power station in the 1930's. They all seem very proud and happy. This source is an official soviet painting, therefore likely to be biased, and used for propaganda by the government. This source is clearly trying to show the good results of industrialization, but it pictures Stalin meeting workers when he hardly left the Kremlin. Source C is a photo of Stalin meeting the wives of army officers. The women seem desperate to touch Stalin who is smiling happily at them. The authenticity of this source is questionable as there is no author or date attached to it. During the purges Stalin killed leading army officers therefore it is likely that this photograph was either taken before the purges or doctored. This source is not very reliable but it does give a good impression of Stalin. The sources show different views of Stalin but source A describes Stalin as a monster responsible for the deaths of millions of Russians. ...read more.

Using my own knowledge of Stalin, I would agree with Khrushchev's view in source G, and partly with source H. I would say that Stalin was far too distrustful, suspicious and paranoid. However, there are many more negative points about Stalin that Khrushchev did not mention in his speech. This was either because he didn't want to disrespect the former leader, due to his high position within the party, or because he may have agreed with some of Stalin's earlier actions for the defence of the principles of communism, which I suspect. In conclusion, I see these two sources as trustworthy and I could relate them to the character of Stalin that I know of. However we must not forget that there are many more characteristics about Stalin that Khrushchev did not mention, especially negative ones. Despite this, these assessments of Stalin are quite accurate in what they say but, indeed, they leave many things to be said about this man's character. 5. Study sources I and J. How far do these two sources agree about Stalin's 'show trials'? Explain your answer. Source I has been published in America under the theme of Stalin's show trials. Source J has been published in France in the late 1930's also under the same theme. In source I, we can see a courtroom where Stalin stands as the judge and the accused seem drunk or somehow drugged as they are all confessing openly in a sarcastic manner like: "OF COURSE, I'M A TRAITOR!" or "YES, I?M GUILTY". The accused admit to these crimes smiling and happier than ever, they seem to joking about their guilt. The cartoon is used to show the absurdity of the confessions as they confess so openly. They should try to at least defend themselves. The source shows that the men were somehow forced into confessing. In the background of the cartoon, there are some gallows already prepared, therefore it means that the trial was pointless as the outcome had already been decided. ...read more.

The disagreement comes mainly because both of these views are true, Stalin killed millions of people but he also improved the USSR as an industrial country. But what causes even more disagreement is Stalin's true character. There are still various opinions about Stalin and I think that the lack of reliable sources is one of its main causes. The sources in this paper are a very good example of it as they give different views about Stalin, but none of them is sufficiently trustworthy so that one could base his opinion about Stalin on it. Stalin will always be a figure in history that causes conflicting opinions. He was a very complex character. As we can see from the sources in this paper there are various opinions about Stalin, he was either a great politician, an evil monster or he was corrupted by absolute power as he was an insecure human being. All three of them can be said to be correct, I don't think there is any right answer about this man's character. It is a fact that Stalin killed millions of people but it is also a fact that he improved the USSR in many ways. This is what confuses many historians and the lack of reliability in the few sources from that time makes it very difficult to get a trustworthy right-answer about Stalin's character. Stalin killed millions of people, especially those who opposed his political views or that posed a threat to him. However, some people believe that without the Purges Stalin could have never led Russia to become as powerful as it did. These days, when people call out the name "Stalin" it brings to mind brutal terrorism and ruthless oppression. But we cannot forget that through these extreme hard measures, Stalin improved Russia both industrially and technically. No one will ever know the real truth about this man, the sources don't allow it neither the real facts. TOMAS SAMPAIO PAGE 4 STALIN: MAN OR MONSTER? Q. 4 ...read more.