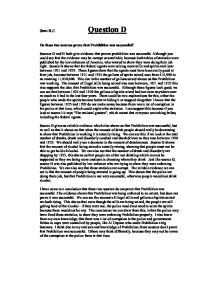 Do these two sources prove that Prohibition was successful?

Do these two sources prove that Prohibition was successful?

Sources G and H both give evidence that proves prohibition was successful. Although you could say that the evidence may be corrupt or unreliable, because both tables of statistics were published by the law enforcers of America, who wanted to show they were doing their job right.  Source G shows that the federal agents were seizing more stills and spirits each year between 1921 and 1929.  These figures show that the agents must have been really good at their job, because between 1921 and 1925 the gallons of spirits seized, rose from 414,000 to an amazing 11,030,000.  This rise in the number of gallons seized shows us that Prohibition was working.  The amount of illegal stills being seized also rose between, 1921 and 1925 this also supports the idea, that Prohibition was successful.  Although these figures look good, we can see that between 1925 and 1929 the gallons of spirits seized had not risen anywhere near as much as it had in the last four years.  There could be two explanations for this, either the people who made the spirits became better at hiding it or stopped altogether. I know that the figures between 1925 and 1929 do not make sense, because there was a lot of corruption in the police at that time, which could explain the statistics.  I can support this because if you look at source I it says “The national gesture”, which meant that everyone was taking bribes, including the federal agents.

Source H gives us reliable evidence which also shows us that Prohibition was successful, but as well as that it shows us that when the amount of drink people should really be decreasing to show that Prohibition is working it is actually rising.  We can see this if we look at the total number of drunks, drunk and disorderly conduct and drunk drivers as they rose between 1920 and 1925.  We should really see a decrease in the amount of drunkenness.  Source G shows that the amount of alcohol being seized is actually raising, showing that people must not be able to get hold of alcohol.  We can also see that the number of drunk and disorderly are dropping by 1925, this shows us that people are either not drinking which can not be supported or they are being more cautious in choosing where they drink.  Just like source G, source H was also published by law enforces who are trying to show they were enforcing Prohibition.  We can also say that these statistics are corrupt.  The reliable evidence we can see is that the amount of people being arrested is going up.  This shows that the police are doing there job, but that Prohibition is not very successful, otherwise people would not drink alcohol.

I have come to a conclusion that these two sources do not prove that Prohibition was successful .The evidence shows that Prohibition was being enforced to an extent, but does not prove it was successful.  We can see the amount of illegal stills and gallons of spirits seized are both rising.  This shows that even though the stills are being seized, the people are still getting hold of the alcohol - if they were not, the police would not need to seize the spirits because there would not be any.  The conclusion we can draw from this, is that the police may have fixed these statistics, to show they were enforcing Prohibition properly.  I also know from my own knowledge, that there was a lot of corruption in the police and government.  Bribes to cops were controlled by people, like Al Capone who made Prohibition a big business.  I think due to my analysis and knowledge of Prohibition, these sources don’t prove that Prohibition was successful.  Others may think differently, because they may not be aware of the corruption in the police force at that time.