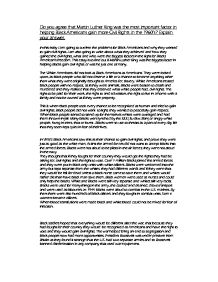 Do you agree that Martin Luther King was the most important factor in helping Black Americans gain more Civil Rights in the 1960's? Explain your answer.

Do you agree that Martin Luther King was the most important factor in helping Black Americans gain more Civil Rights in the 1960's? Explain your answer. In this essay I am going to out line the problems for Black Americans and why they wanted to gain civil rights. I am also going to write about what they achieved and how they gained the civil rights, what and who were the biggest factors in the fight for Blacks American's freedom. This essay is to find out if Martin Luther King was the biggest factor in helping Blacks gain civil rights or was he just one of many. The White Americans did not look at Black Americans as Americans. They were looked upon, as black people who did not deserve a life or a chance to become anything other than what they were originally brought to America for, slavery. White Americans treated black people with no respect, as if they were animals. Blacks were beaten to death and murdered and they realized that they deserved what white people had, civil rights. The right to be paid for their work, the right to and education, the right to live in a home with a family and not be owned as if they were property. This is when black people took every chance to be recognized as human and tried to gain civil rights. Black people did not want to fight; they wanted to peacefully gain respect. When black people started to stand up for themselves whites were outraged and had them thrown in jail. ...read more.

In 1960, as Black American students entered the politics in large amounts for the first time, civil rights protesting began to change. Non-violence was not just a strategy, although it did get sympathy from many whites. During 1960 sit-ins broke down the segregation of the South, and lunch counters were de-segregated in cities in Texas, North Carolina, and Tennessee. Boycotters, both black and white people were supporting the protesters, many bus companies did not want to lose the revenue of customers. In Louisiana, Mississippi, Alabama, Georgia, and South Carolina, there were more whites in the community and local government. Cities such as Montgomery, Alabama, made the demonstrations illegal, white storeowners refused to serve blacks, as it was their own private property. Throughout the South, protesters faced arrest and violence as police and the Ku Klux Klan worked together to stop the protests. By the end of 1960, 36,000 students had been arrested and thousands were expelled from college. With support from Black American activist Ella Baker of the Southern Christian Leadership Conference (SCLC), students made a permanent organization in 1960, the Student Non-violent Coordinating Committee (SNCC). The way of occupying a place as a means of non-violent protest got priority in the Civil Rights Movement. Sit-ins at lunch counters inspired other similar types of protesting at different segregated places, such as swimming places. The non-violent resistance was one of the most important factors of the 1960 sit-in protests. Segregation was seen to be a moral as well as a legal issue. ...read more.

My reason being that before Martine Luther King started his civil rights campaigns Black Americans had already started to put their thought into action by giving their opinion. Yes Many Blacks were afraid of what could happen. But there was also Malcolm X who was a factor of Blacks gaining civil right. Martine Luther King use non-violence and Malcolm X use violence. Black people all had different opinion even though they all wanted the same thing, civil rights, freedom, and the right to vote without intimidation. Blacks helped in the World War Two. Rosa Parks started the bus Boycotts on her own, she did not have Martin Luther King telling her to stay on the bus in her seat, she did it out of her own free will which gave people the courage. Black students started the sit-ins with their own free will, they had enough of being treated as un-equal, again they did not have Martine Luther King telling them to sit in a white only restaurant. All the movements were started freely without Martine Luther King's influence at first, and then Martine Luther King joined in and used them as protests. I think that Black Americans would have gained civil rights sooner or later due to the world progressing; there would have been retaliation from the world towards America to change their racist ways. So I think that yes Martine Luther King did help Black Americans gain their civil rights but there were other activist groups who also helped, such as Malcolm X. No Martin Luther King was not the largest factor of blacks in America gaining civil rights. ...read more.